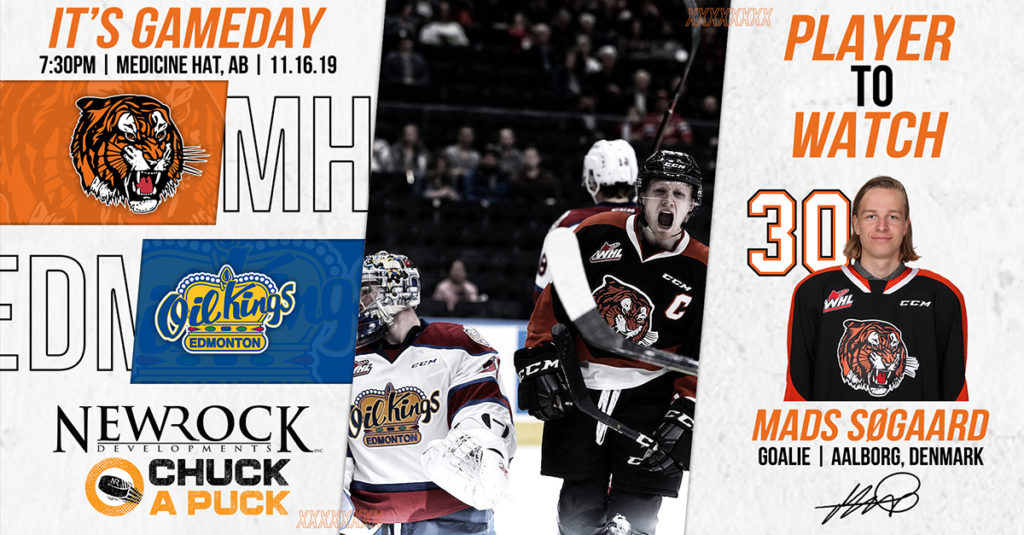 The Medicine Hat Tigers erased a 3-1 deficit to defeat the Red Deer Rebels 4-3 in a shootout last night. Jonathan Brinkman scored the game winning goal while rookie goaltender Garin Bjorklund stopped 29 of 32 shots and three out of four shooters in the shootout. It was the Tabbies’ final game of a nine game road trip where they went 5-4-0-0 and improved their overall record to 13-6-1-0. The Tigers are led by veteran forwards James Hamblin with 29 points (12G, 17A) and Brett Kemp with 23 points (5G, 18A).

For the second time this season the Tigers and the Oil Kings will faceoff. The Oil Kings took the first meeting 4-2 on October 25th, 2019. The last time Medicine Hat defeated Edmonton was January 16th, 2019, in a 4-3 shootout. Over the past five years, the Tigers are 13-4-2-0 against the Oil Kings and 7-0-2-0 when playing in Medicine Hat.

The Edmonton Oil Kings fell 3-0 to the Tri-City Americans on Monday afternoon and will look to return to their winning ways tonight. The Oil Kings are 13-3-3-1 and they are currently sitting on top of the Central Division and the Eastern Conference. Edmonton is led by veteran forward Riley Sawchuk with 26 points (10G, 16A) and 2020 Draft Eligible Jake Neighbours with 23 points (4G, 19A).

Mads Søgaard was drafted in the second round, 37th overall by the Ottawa Senators in the 2019 NHL Entry Draft making him the third highest NHL drafted goalie in Tigers franchise history. The 6’7 Danish netminder has quick lateral movement, is incredibly patient and calm in net. He has great positioning and rebound control. Søgaard is 7-5-1-0 so far this season with a 3.01 GAA and 0.900 SAV%.

Captain James Hamblin was named the WHL On the Run Player of the Week for the week ending November 10th, 2019. During that week, the 20-year-old Edmonton product led all WHL scorers with 8 points (3G, 5A) in three games played improving his season total to 29 points (12G, 17A) in 20 games. After being drafted 17th overall by the Tigers in 2014, Hamblin has suited up for 281 games, scored 91 goals and picked up 130 assists. He is a speedy, hardworking, determined two-way forward who leads his team by example.

Medicine Hat Skateboarding Association is a Registered Society of Alberta that provides skateboarding opportunities for local children and youth through skill-building programs like “Skate Skool” and skate competitions like “Beat the Heat.” Over the last 15 years, MHSA has served to promote athletic activity in young people and further the advancement of the sport of skateboarding in Medicine Hat.