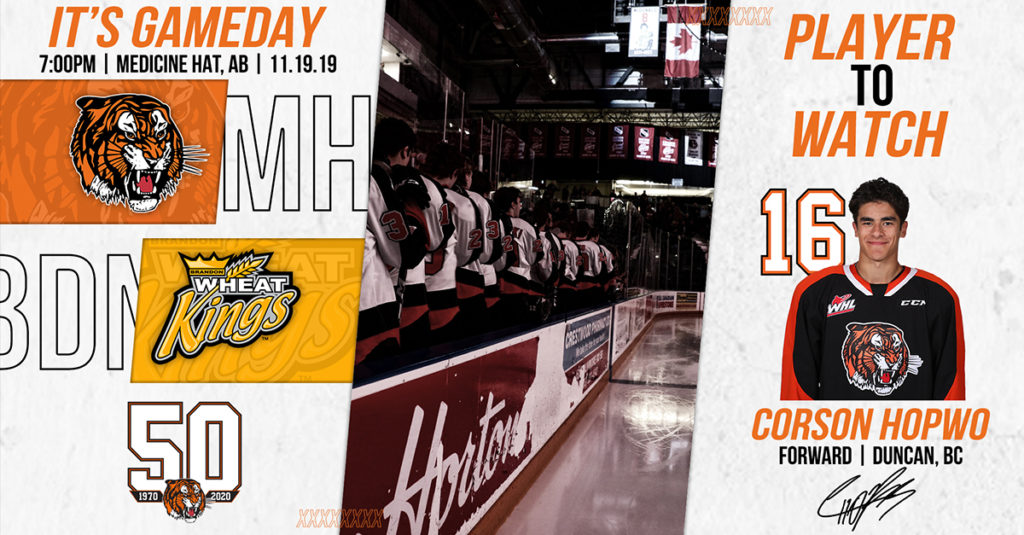 The Medicine Hat Tigers returned home after a nine game road trip to host the Edmonton Oil Kings on Saturday night and they won 5-1. Captain James Hamblin picked up four points (2G, 2A) and veteran forward Corson Hopwo picked up three (2G, 1A) in the victory. Saturday’s game was the Tabbies’ first of a four game homestand and with game two happening tonight against the Brandon Wheat Kings. The Orange and Black are 14-6-1-0 and they are led by Hamblin with 33 points (14G, 19A). After tonight the Tigers will host the Moose Jaw Warriors on Friday and the Prince Albert Raiders on Saturday.

The Brandon Wheat Kings will finish a three game road trip tonight in Medicine Hat. They kicked off their road trip by falling 4-3 to the Red Deer Rebels on Saturday before defeating the Edmonton Oil Kings 5-4 in a shootout on Sunday. After tonight they will return home to host the Calgary Hitmen on Friday and the Regina Pats on Saturday. The Wheat Kings are 10-13-0-0 so far this season and they are led by Ben McCartney with 21 points (10G, 11A).

Corson Hopwo has been heating up for the Tigers since the start of November with 8 points (5G, 3A) in 7 games played. The 18-year-old Duncan, BC native brings energy, speed, high hockey IQ and good footwork into every game. He is a skilled, smart forward with a tireless work ethic. Look for Hopwo to make an impact in tonight’s tilt.

Captain James Hamblin is currently leading the league in scoring with 33 points (14G, 19A). The 20-year-old Edmonton product is also tied in third in the league for most goals (14) and tied in fourth for most assists in the league (19). “Jimmy has been outstanding this season. His game is based on effort and execution, both of which he has been doing at a high level. He plays in all situations and has been a consistent player in each game. He has put up points at a but it’s more than stats that make him who he is. One of the most complete players in the league,” said Assistant Coach Ryan Smith.

Nominate someone in our community for a Fountain Tire & Tigers 3-Star Experience including $250 gift certificate to Fountain Tire, $200 to the Tigers Souvenir Store, and an in-game presentation to honour them. For more information: www.fountaintire3stars.com

Alberta Poundand Rescue Centres (APARC) Medicine Hat is the home to stray and lost animals of Medicine Hat. They also offer – adoption, foster and volunteer programs for all ages.