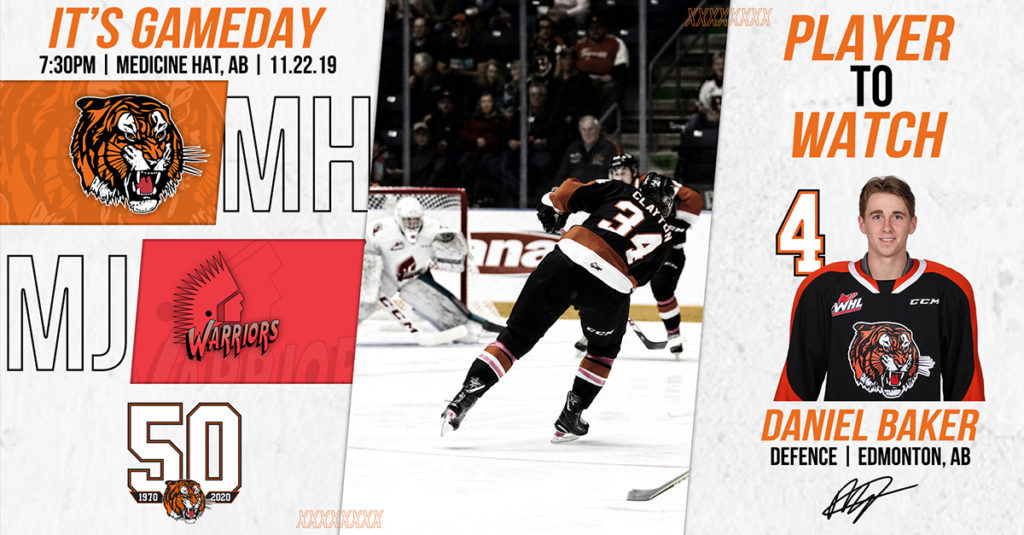 The Medicine Hat Tigers were bested 4-0 by the Brandon Wheat Kings on Tuesday night and they will look to return to their winning ways tonight when they host the Moose Jaw Warriors. The Orange and Black are 14-7-1-0 overall and 6-2-1-0 at home. Medicine Hat is led by veteran forwards Captain James Hamblin with 33 points (14G, 19A) and Brett Kemp with 24 points (6G, 18A). After tonight’s battle with the Warriors, the Tabbies will host the Prince Albert Raiders on Saturday.

For the first time this season the Tigers will faceoff against the Warriors. Last year, these two hockey clubs met four times and the Tabbies boasted a 1-2-0-1 record against the Warriors with their only win coming December 5th, 2018, in overtime. Over the past five years Medicine Hat is 4-6-1-1 overall against Moose Jaw and 2-3-0-1 when playing at home. The Tigers and the Warriors will meet again next Friday in Moose Jaw.

The Moose Jaw Warriors lost 4-0 to the Saskatoon Blades on Sunday and they will be looking to rebound tonight in Medicine Hat. The Warriors are 9-9-1-0 so far this season and they are led by 2021 NHL Draft Eligible Ryder Korczak with 29 points (8G, 21A) in 19 games played and 2019 Anaheim Ducks draft pick Brayden Tracey with 22 points (10G, 12A) in 12 games played. After tonight the Warriors will return to Mosaic Place to host the Calgary Hitmen on Saturday night.

Daniel Baker is a smart, two-way defenceman in his second season with the Orange and Black. The 18-year-old Edmonton native is a calm, collected player who is not afraid to join the rush up the ice. Baker has already set a new career high in goals this season with 6 and he is two points away from matching his total points from last season (17).

Captain James Hamblin is currently tied in second in the league for scoring with 33 points (14G, 19A). The 20-year-old Edmonton product has been the Tigers’ most consistent player all season. Hamblin reads plays well which allows him to always be in the right spot. He is a speedy, hardworking, two-way forward with the ability to set up his teammates or score goals himself.

Nominate someone in our community for a Fountain Tire & Tigers 3-Star Experience including $250 gift certificate to Fountain Tire, $200 to the Tigers Souvenir Store, and an in-game presentation to honour them. For more information: www.fountaintire3stars.com

The Multiple Sclerosis (MS) Society Southeastern Alberta Chapter – Canada has one of the highest rates of MS in the world. On average, 11 Canadians are diagnosed with MS every day. The MS Society is a leader in worldwide research. Over the past 70 years, the MS Society of Canada has invested $175 million in MS research looking into treatments, the cause and ultimately a cure.