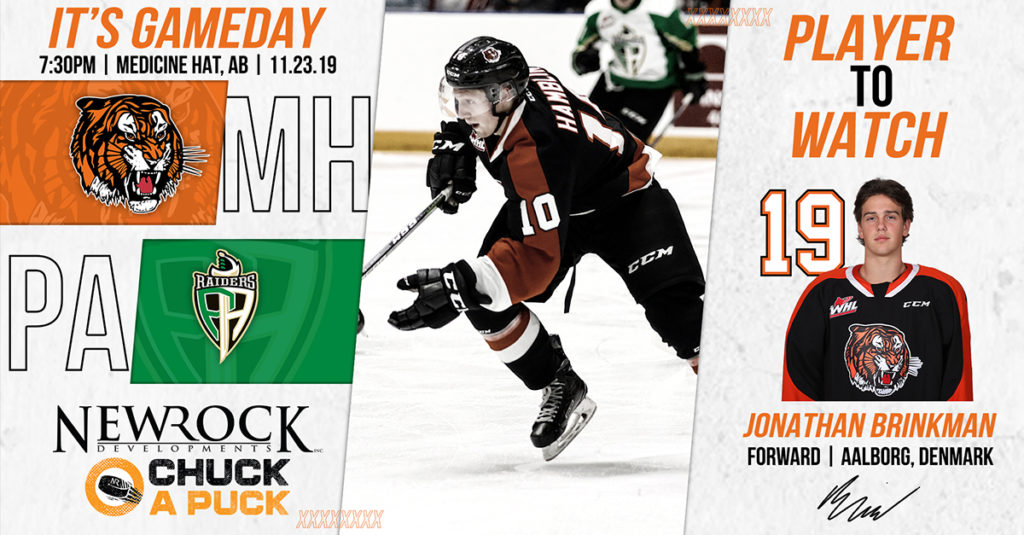 The Medicine Hat Tigers defeated the Moose Jaw Warriors 3-1 last night at the Canalta Centre. Captain James Hamblin had a goal and an assist while veteran defenceman Trevor Longo picked up a pair of assists in the victory. The Orange and Black are now 15-7-1-0 and they are led by Hamblin with 35 points (15G, 20A). After tonight’s game, the Tigers will pay a visit to Mosaic Place Friday, Nov 29th to battle the Warriors.

For the first time this season, the Tigers will take on the Raiders. Last year these two hockey clubs met four times with Prince Albert winning every meeting. The last time the Tigers defeated the Raiders was December 6, 2017, in a 5-4 shootout win. Over the past five years, Medicine Hat is 5-6-1-0 against Prince Albert and 2-3-1-0 when playing at home.

The Prince Albert Raiders beat the Lethbridge Hurricanes 5-3 last night. Washington Capitals prospects Aliaksei Protas potted a pair of goals in the victory while goaltender Boston Bilous stopped 30 of 33 shots faced. The Raiders are 16-4-3-1 overall this season and 8-3-1-1 on the road. They are led by Protas with 36 points (17G, 19A).

Jonathan Brinkman in the Tigers’ first round 2019 CHL Import Draft pick from Aalborg, Denmark. The 18-year-old forward is highly skilled with great speed. Brinkman uses his intelligence and creativity to generate opportunities offensively. Look for Brinkman to drive to the net and create scoring lanes tonight.

Captain James Hamblin has been heating up this month for the Tigers picking up 18 points (9G, 9A) in 9 games played. Hamblin is second in the league for scoring with 35 points (15G, 20A). The 20-year-old Edmonton product has been the Tigers most consistent player all season. Hamblin reads plays well which allows him to always be in the right spot. He is a speedy, hardworking, two-way forward with the ability to set up his teammates or score goals himself.