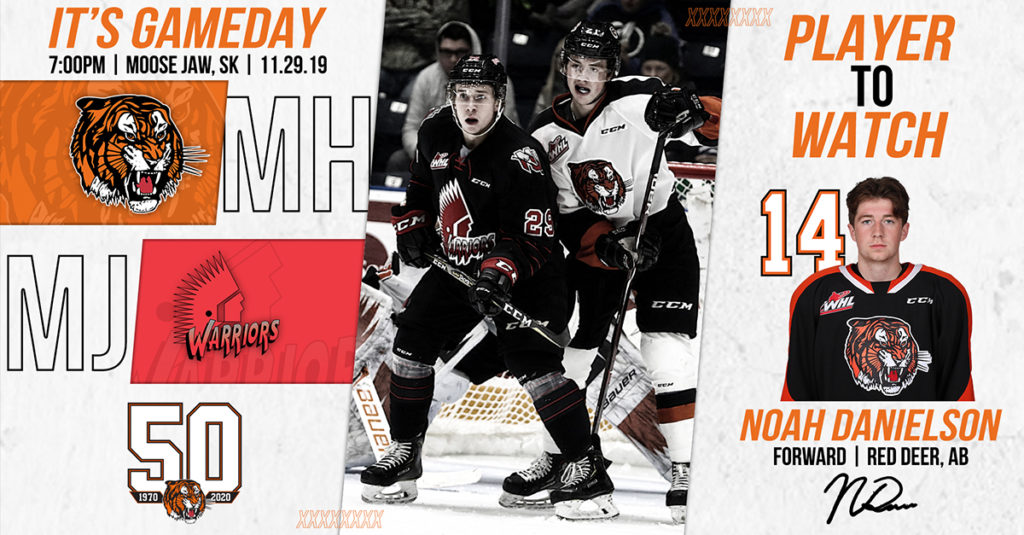 The Medicine Hat Tigers won three of four games during their recent homestand including a thrilling 4-2 victory Saturday over the Prince Albert Raiders. Veteran forward Brett Kemp picked up an assist before scoring the game winning goal in the contest. Medicine Hat is 16-7-1-0 so far this season and they are led by Captain James Hamblin with 35 points (15G, 20A) and Brett Kemp with 26 points (7G, 19A).

A week after their first meeting in Medicine Hat, the Tigers and the Warriors are set to faceoff in Moose Jaw. The Tigers protected home turf and defeated the Warriors 3-1 last Friday. Captain James Hamblin scored the game winning goal and picked up an assists in the contest. Medicine Hat is 5-6-1-0 against Moose Jaw over the past five years and 2-3-1-0 when playing at Mosaic Place.

Noah Danielson is a small, skilled, fast forward in his first season with the Orange and Black. The 17-year-old Red Deer product was drafted by the Tigers in the fourth round, 87th overall in the 2014 WHL Bantam Draft. Danielson played as an affiliate player for the Tabbies twice last season before embarking on his rookie campaign this year. In 14 games played, he has picked up three assists.

Captain James Hamblin has been the Tigers most consistent hard working player this season. He leads the team in points with 35 (15G, 20A) and he is ranked fifth in the league for scoring. The 20-year-old Edmonton product collected two points (1G, 1A) in the last meeting between the Tigers and the Warriors.