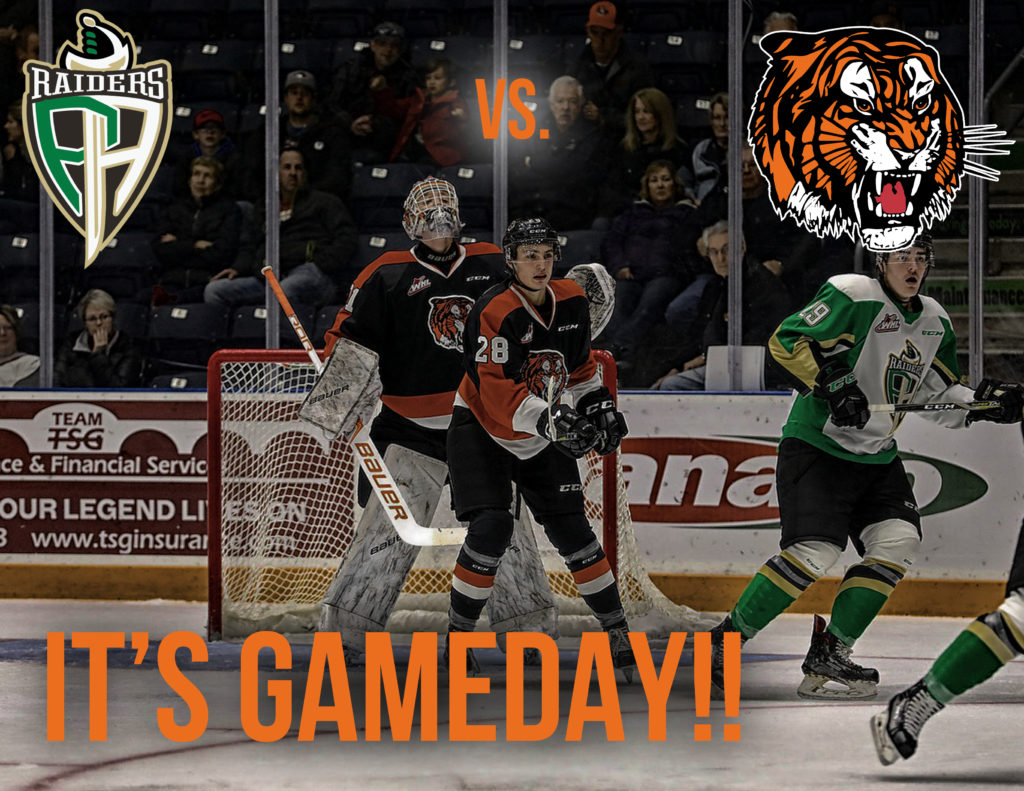 The Medicine Hat Tigers return home after playing 4 games in 5 days on the road that ended with a 2-0 victory in Swift Current on Saturday. Ryan Chyzowski scored both goals for the Tigers while Mads Sogaard earned his first Career WHL Shutout. The Orange and Black are 10-11-1-2 this season and will be looking to improve their record in tonight’s contest.

This will be the fourth and final meeting between these two clubs this season and the Raiders have won all three previous contests. Medicine Hat is 6-7-2-0 against Prince Albert over the last 5 seasons. The last time the Tigers beat the Raiders was a 5-4 SO Dec 6th, 2017, when Jordan Hollett set a career high with 49 saves on 53 shots faced.

The Prince Albert Raiders are ranked 1st in the country with an impressive 21-1-0-0 record. Tonight marks their first game of seven on the road. Prince Albert is currently on a 14 games winning streak and their only loss this season was a 4-3 contest against the Rebels Oct 6th in Red Deer. The Raiders are led by veteran forwards Brett Leason with 47 points (22G, 25A) and Sean Montgomery with 25 points (11G, 14A).

Jordan Hollett is a very technically sound goaltender and squares up to the puck well. The 19-year-old Langley, BC, native is a towering 6’5 and catches with his left hand. Hollett was drafted by the Ottawa Senators in the 2017 NHL Entry Draft.

Captain James Hamblin is leading the way for the Tigers this season. Hamblin is the top point producer for the Tabbies with 25 points (9G, 16A) in 24 games played. The 19-year-old Edmonton, AB product leads the Tigers by example as he exemplifies hard work, hustle and heart. Look for the Captain to set up his teammates as well as light the lamp himself in tonight’s contest.

Wawanesa Insurance is a Canadian mutual company owned by its policyholders. It is one of the largest property and casualty insurers in Canada. Wawanesa has a rich history dating back to September 25, 1896, when it was founded in the Village of Wawanesa, Manitoba. Wawanesa will be handing out rally wear at tonight’s game.

Special Olympics Alberta – The mission of Special Olympics is to provide year-round sports training and athletic competition in a variety of Olympic-type sports for children and adults with intellectual disabilities (ID). This gives them continuing opportunities to develop physical fitness, demonstrate courage, experience joy and participate in a sharing of gifts, skills and friendship with their families, other Special Olympics athletes and the community