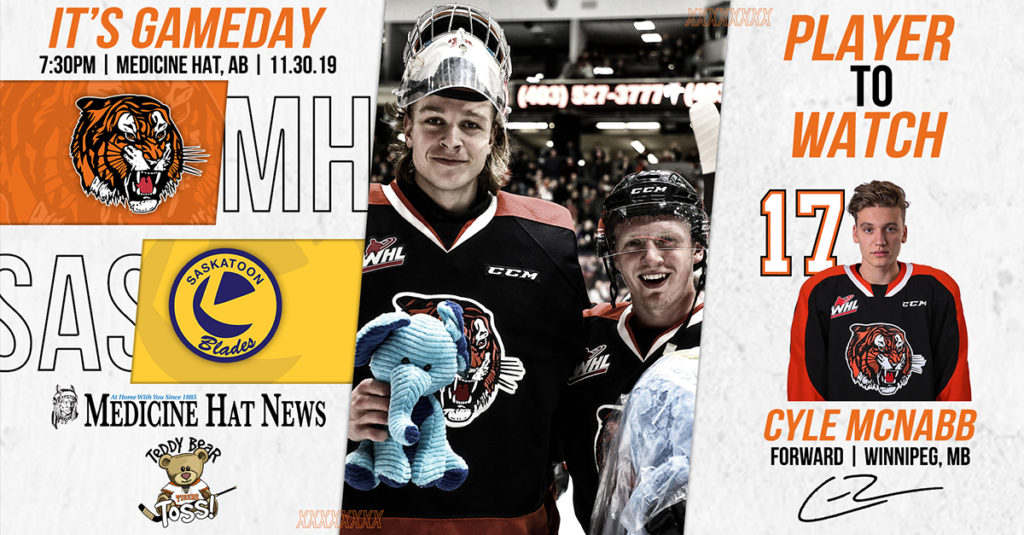 The Medicine Hat Tigers won their third straight game last night when they defeated the Moose Jaw Warriors 6-0 at Mosaic Place. Captain James Hamblin scored a pair of goals and picked up an assist in the victory while goaltender Mads Søgaard stopped all 15 shots faced to earn his second shutout of the season. Tonight the Tabbies will host the Saskatoon Blades for their Annual Medicine Hat News Teddy Bear Toss game. Fans are encouraged to bring teddy bears and winter wear items in plastic bags to throw on the ice when the Tigers score their first goal. The Orange and Black are 17-7-1-0 and they are led by Hamblin with 38 points (17G, 21A).

For the second time this season, the Tabbies will host the Blades. The last time these two hockey clubs met was October 15th in Medicine Hat when the Tigers came out on top of a 3-1 victory. Rookie defenceman Dru Krebs scored his first career WHL goal in the contest. Over the past five years, Medicine Hat is 8-4-0-1 against Saskatoon and 5-2-0-0 when playing at home. The next time these two hockey clubs will meet is December 10th in Saskatoon.

The Saskatoon Blades came from behind to defeat the Lethbridge Hurricanes 4-3 in a shootout on Friday night. Zach Huber scored the game tying goal to force extra time with less than two minutes to play in regulation before Kyle Crnkovic scored the game winner in the shootout. Goaltender Nolan Maier stopped 40 of 43 shots faced in the contest to help the Blades improve their record to 14-12-1-1. The Blades are led by veteran forward Riley McKay with 23 points (10G, 13A).

Cyle McNabb made his debut with the Tigers in last night’s 6-0 victory and picked up his first point with his new club by assisting on the team’s fifth goal of the game. The 19-year-old Winnipeg MB product is a strong, two-way forward who likes to shoot the puck and play the body. Look for McNabb to make an impact in tonight’s tilt.

Captain James Hamblin is leading the Tigers with 38 points (17G, 21A) and he is ranked third in the league in scoring. The 20-year-old Edmonton product was drafted 17th overall by the Tigers in the 2014 Bantam Draft. Since then he has suited up for 286 games, scored 96 goals and picked up 134 assists. Hamblin leads his team by example and he is consistently the team’s hardest worker.

Medicine Hat News is a daily newspaper published in Medicine Hat, AB. On Oct 29th, 1885, the first issue of the forerunner to the Medicine Hat News, the Times, was run off a tiny hand press. The paper was a community booster, a voice for Southeastern Alberta and a publication that residents of the area still turn to over 130 years later.

The Medicine Hat & District Health Foundation advances the health of our community through innovation and enhancements to healthcare services in Southeastern Alberta. The Teddy Bears from tonight’s teddy bear toss will be delivered by players to Pediatrics, Children’s Health and Developmental Services (CHADS), Emergency Department, Diagnostic Imaging, Operating Room or Operating Suite, Lab and Mental Health.