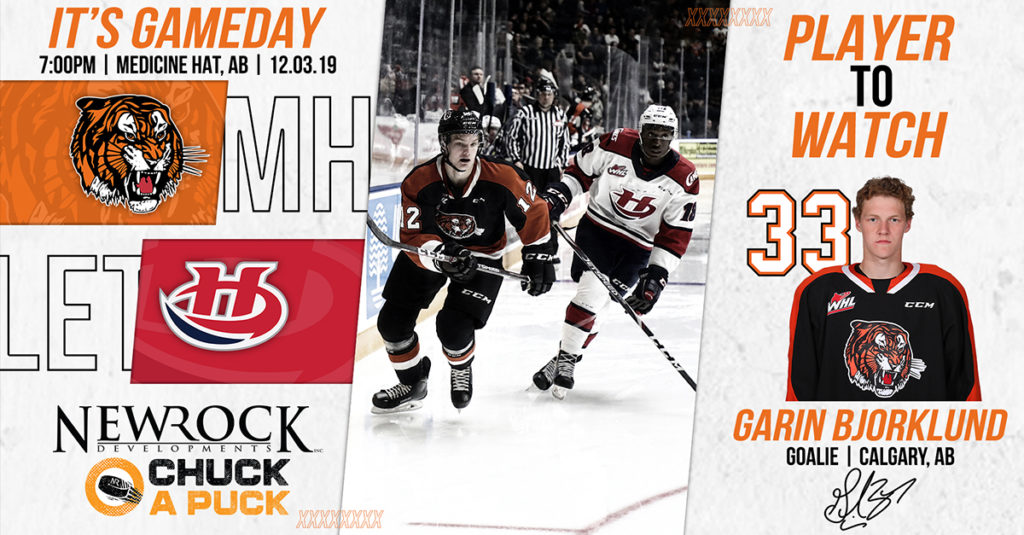 The Medicine Hat Tigers won their fourth straight game on Saturday night when they defeated the Saskatoon Blades 5-3. Trailing 3-2 heading into the final frame, the Tabbies scored three goals in just over a minute and a half to make it 5-3. Veteran forward Elijah Brown had three points (1G, 2A) in the contest. The Orange and Black are 18-7-1-0 and they are led by their Captain James Hamblin with 41 points (17G, 24A).

The Tigers and the Hurricanes will play a home and home series this week starting tonight in Medicine Hat. After tonight’s game the Tigers will travel to Lethbridge Friday for a rematch. These two Central Division Rivals have met three times already this season with Medicine Hat winning both contests in Lethbridge in a shootout and falling once at home. Over the past five years, the Tabbies are 12-15-0-0 against the Hurricanes and 6-7-0-0 when playing at home.

The Lethbridge Hurricanes fell 4-3 in a shootout to the Saskatoon Blades on Friday night. Rookie forward Oliver Okuliar scored twice in the game while goaltender Carl Tetachuk stopped 26 of 29 shots faced and two of three shooters during the shootout. The Hurricanes are 17-7-0-4 and they are led by Buffalo Sabres prospect Dylan Cozens with 40 points (18G, 22A).

Goaltender Garin Bjorklund is the Tigers first round draft pick from the 2017 Bantam Draft. The 17-year-old Calgary native is a very athletic goalie that challenges each shot and competes in every play. Bjorklund is 7-1-0-0 to start his rookie campaign with the Tigers and he has a 2.33 GAA and 0.920 SAV%. He has been listed as a C prospect by NHL Central Scouting as a player to watch.

Captain James Hamblin has been heating up for the Tigers. He picked up 24 points (11G, 13A) in 12 games over the month of November. Overall he has 41 points (17G, 24A) this season. The 20-year-old Edmonton product is consistently the hardest working Tiger who leads his team by example. Look for Hamblin to make an impact in tonight’s contest.

Since 2010, NewRock Developments has been on a mission to provide exceptional, attainable housing in cities throughout Western Canada. As a multicity developer, they understand the importance of building communities that are well integrated. To achieve this, city selection and community involvement are very important. NewRock Developments will be partnering with Medicine Hat Peewee AA Orange for tonight’s Chuck a Puck.

Medicine Hat BMX has come a long way in their 38 years as a club, with over 125 riders in 2019 ranging from 4 years old to over 50 years old. They are in the early stages of creating a brand new start hill to update their track to be able to welcome an even higher caliber of racing to Medicine Hat and would love to have the support of the whole community for this project.