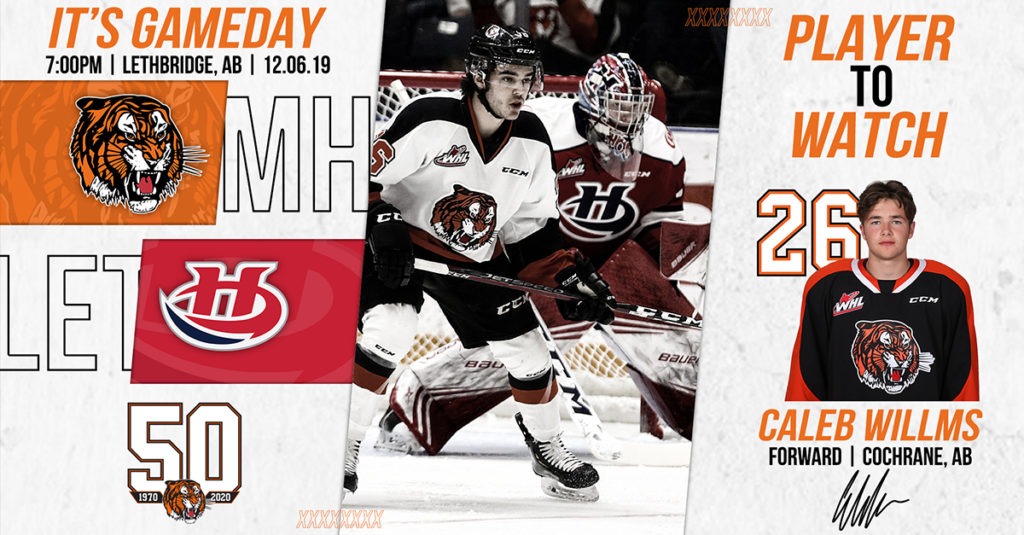 The Medicine Hat Tigers won their fifth straight game on Tuesday night when they defeated the Lethbridge Hurricanes 8-3. Veteran forwards Brett Kemp and Ryan Chyzowski recorded four points (2G, 2A) each in the contest while linemate Cole Sillinger recorded three assists. Tonight the Tabbies will travel West on Highway Three to take on the Hurricanes for a rematch. The Tigers are now 19-7-1-0 and they are led by Captain James Hamblin with 42 points (17G, 25A). After tonight, the Orange and Black will return home to host the Everett Silvertips on Saturday.

Tonight’s game is the Lethbridge Hurricanes’ third in four days. After falling 8-3 to the Tigers on Tuesday night, the Hurricanes returned home to host the Everett Silvertips on Wednesday and they lost 3-1 despite rookie goaltender Bryan Thomson stopping 34 of 37 shots faced. Veteran defenceman Alex Cotton has five points (1G, 4A) in four games played against the Tigers this season while Buffalo Sabres prospect Dylan Cozens has four points (2G, 2A) in two games against the Tabbies.

Caleb Willms is in his first season with the Tigers and he has 7 points (3G, 4A) in 20 games played so far. The 17-year-old Cochrane, AB product is a smart, skilled forward, that has a nose for the net. He has excellent hands and can control the puck in tight quarters. He works and competes hard every game.

Captain James Hamblin was named the WHL McSweeney’s Player of the Month for the month of November after putting up 24 points (11G, 13A) in 12 games played that month. Hamblin is the Tigers’ leading scorer with 42 points (17G, 25A) in 27 games and he is in a three way tie in first for scoring in the league. The hardworking, two-way forward leads his team by example and will look to make an impact tonight.