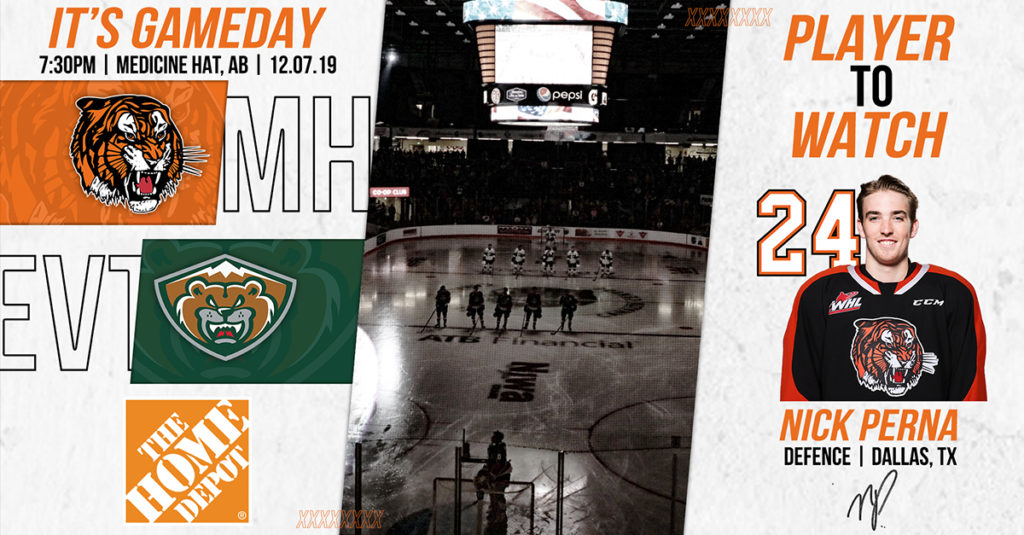 The Medicine Hat Tigers were trailing 3-1 and came back to defeat the Lethbridge Hurricanes 4-3 in a shootout on Friday night in Lethbridge. It was the Tigers’ sixth straight win and the 47th time in the team’s 50 year franchise history where they’ve won 20 or more games in a season. Elijah Brown had a two point night (1G, 1A) extending his point streak to nine points (3G, 6A) in the last five games. The Tigers are 20-7-1-0 and they are led by Captain James Hamblin with 43 points (17G, 26A).

For the first and only time this season, the Tigers will faceoff with the Silvertips. Last year, the Tabbies paid a visit to Angel of the Winds Arena in Everett and defeated the Silvertips 1-0. Goaltender Mads Søgaard stopped all 41 shots faced and earned his third career shutout in the contest. Captain James Hamblin scored the Tigers’ lone tally on the power play. Medicine Hat is 2-1-0-0 against Everett over the past five years.

Tonight’s game will be the third of a five game road trip for the Everett Silvertips. They started their road trip by turning aside the Lethbridge Hurricanes 3-1 on Wednesday night. Friday they travelled to Swift Current and took down the Broncos 5-1. Veteran forward Bryce Kindopp had a four point night (2G, 2A) in Swift Current while forward Gage Goncalves has five points (2G, 3A) so far on the road trip. The Silvertips are 19-6-1-0 and they are led by Kindopp with 32 points (17G, 15A).

Nick Perna is the newest member of the Tigers’ blueline after being acquired from Portland November 28, 2019. The 18-year-old Dallas, Texas native has suited up for two games for the Orange and Black and he scored his first goal with his new team Tuesday, December 3 against the Lethbridge Hurricanes. Perna is a smart, smooth skating, two-way defenceman.

Captain James Hamblin is leading the Tigers with 43 points (17G, 26A) and he is tied for top scorer in the league. He also leads the league with the most assists. The 20-year-old Edmonton product has eight points (2G, 6A) in his last four games played and he was named the WHL McSweeney’s Player of the Month for November after putting up 24 points (11G, 13A) in 12 games played that month. Hamblin leads the Tigers by example with his tireless work ethic. Look for the Captain to make an impact in tonight’s contest.

The Home Depot caters to do-it-yourselfers, as well as home improvement, construction and building maintenance professionals. The Home Depot Canada operates 182 stores in convenient locations across Canada including the one here in Medicine Hat.

Special Olympics Alberta – Medicine Hat serves athletes with intellectual disabilities from our community. Through Special Olympics, athletes develop sports skills, social skills and self-esteem, which assist them in becoming actively involved in recreational, educational, and employment opportunities in our community.