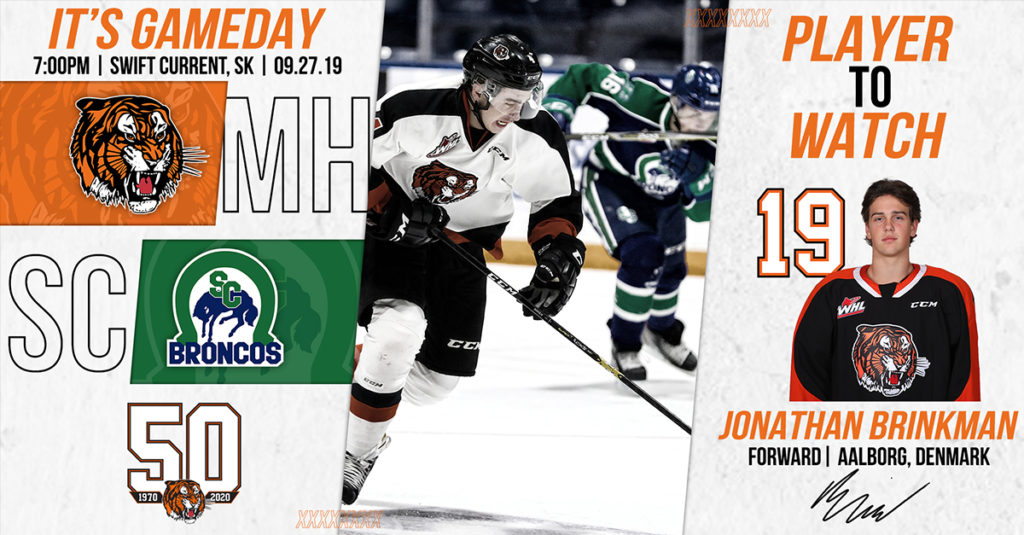 The Medicine Hat Tigers kicked off their WHL campaign by splitting their home and home series against the Lethbridge Hurricanes. After winning 4-3 in a shootout last Friday, the Tigers fell 3-1 at home on Saturday night. This weekend the Orange and Black will play three games in three days, starting with a home and home series against the Broncos before travelling to Calgary for an afternoon tilt with the Hitmen on Sunday.

With the relocation of the Kootenay ICE to Winnipeg, Swift Current joins Medicine Hat in the Central Division this season. The two hockey clubs will face off eight times including this weekend’s home and home series. Over the past five years, the Tigers are 8-4-0-0 against the Broncos.

The Swift Current Broncos opened their season by defeating the Calgary Hitmen 3-2 in overtime last Saturday night. Second year Finnish forward Joona Kiviniemi scored the game winner with one second left to play in overtime. Goaltender Isaac Poulter stopped 34 of 36 shots faced during the contest. After this weekend’s home and home series with the Tigers, the Broncos will return to the Innovation Credit Union I-Plex for a five game homestand starting Wednesday against the Edmonton Oil Kings.

Captain James Hamblin led the Tigers in scoring last season with 77 points (33G, 44A) in 67 games. The 20-year-old Edmonton native is hardworking, two-way centre who embodies what it means to be a Tiger. “The key to success will be to outwork our opponents. We have the skill and we have speed, so if we can outwork them as well, we should do great,” said Hamblin.