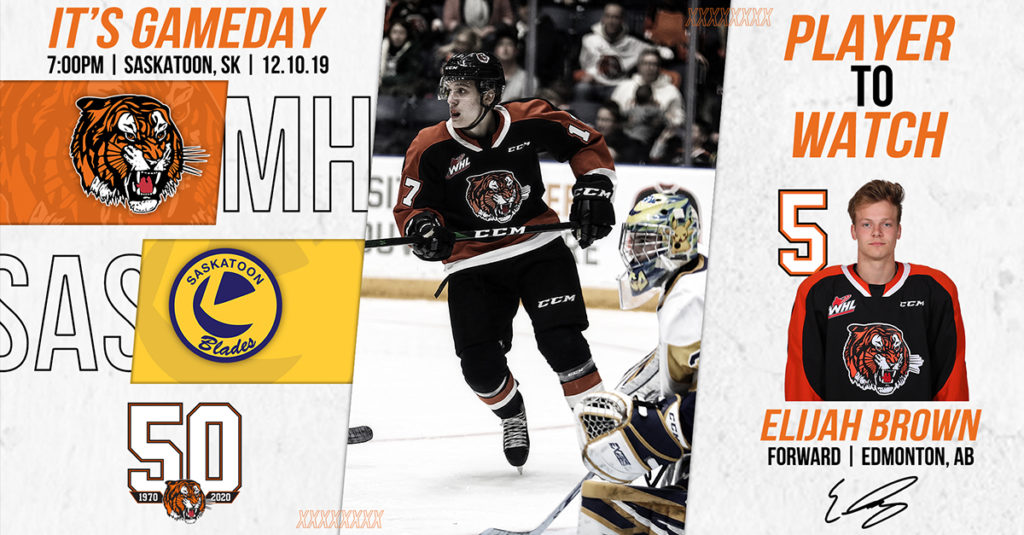 After defeating the Lethbridge Hurricanes 4-3 in a shootout Friday, the Medicine Hat Tigers’ six game winning streak was snapped when they fell 5-0 to the Everett Silvertips Saturday at home. Saturday’s game was the third time this season the Tabbies have been kept off the scoresheet. This week, the Orange and Black will play four games in five nights starting tonight in Saskatoon. The Tigers are 20-8-1-0 so far this season and they are led by Captain James Hamblin with 43 points (17G, 26A).

The Tigers will battle the Blades tonight in Saskatoon for their third meeting of the season. Both previous matchups were played in Medicine Hat and the Tigers came out on top. Veteran forward Brett Kemp has 4 points (1G, 3A) in the series so far. Over the past five years, the Tabbies are 9-4-0-1 against the Blades and 3-2-01 when playing in Saskatoon.

The Saskatoon Blades fell 4-3 in a shootout to the Kelowna Rockets on Saturday night. Zach Huber, Colton Dach and Tristen Robins each scored a goal during the contest while goaltender Nolan Maier made 23 saves on 26 shots faced. Maier also stopped one of the two shooters faced during the shootout. The Blades are 14-13-1-2 and they are led by veteran forward Riley McKay with 24 points (11G, 13A).

Elijah Brown is a speedy, skilled forward in his third season with the Orange and Black. The 19-year-old Edmonton product sees the ice well, is creative and he is not afraid to mix it up. Brown has 19 points (5G, 14A) in 29 games played so far this season. Look for Brown to drive to the net and create scoring opportunities tonight.

Captain James Hamblin has been having a strong campaign in his overage season with the Tigers. The 20-year-old Edmonton native is currently second in the league in scoring with 43 points (17G, 26A) and he is in a four way tie for most assists (26). Hamblin is a hard working, two-way forward who leads the Tabbies by example.