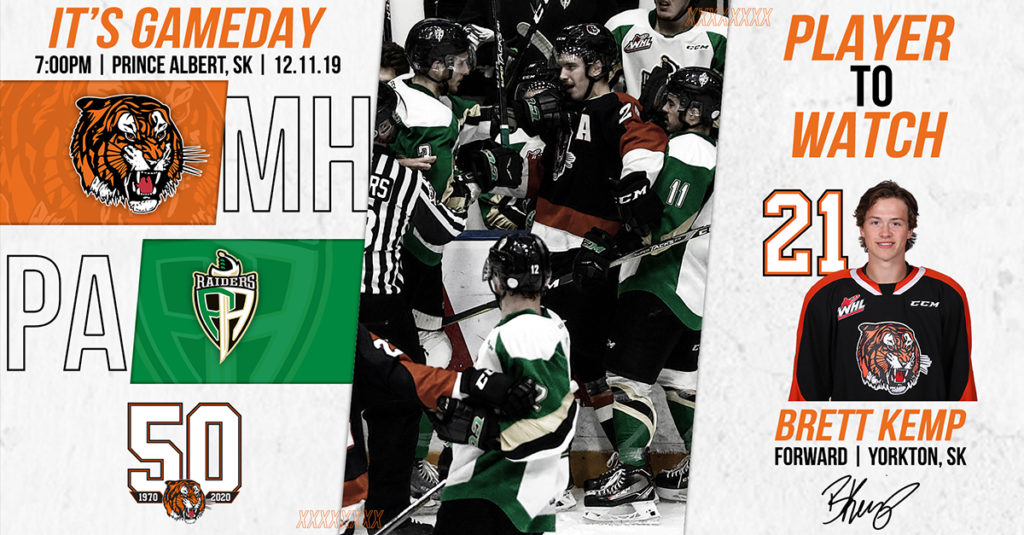 The Medicine Hat Tigers play four games in five days this week. They kicked off their busy week by defeating the Saskatoon Blades 11-3 Tuesday night at the SaskTel Centre. Seven different Tigers scored in the contest including Cyle McNabb who scored his first career WHL hat trick. The Orange and Black are now 21-8-1-0 and they are led by their Captain James Hamblin with 48 points (17G, 31A). After tonight’s game in Prince Albert, the Tigers will travel to Red Deer to play the Rebels Friday before returning home Saturday to host the Edmonton Oil Kings.

For the second time this season, the Tigers will faceoff with the Raiders. The first meeting between these two hockey clubs was Nov 23, 2019, in Medicine Hat where the Tigers won 4-2. Brett Kemp scored the game winning goal midway through the final frame before Corson Hopwo added the insurance goal. Over the past five years, the Tigers are 6-6-1-0 against the Raiders and 3-3-0-0 when playing in Prince Albert. The next meeting between these two clubs will be Jan 25, 2020, in Prince Albert.

The Prince Albert Raiders defeated the Moose Jaw Warriors 5-1 on Saturday night. Rookie Michael Horon had his first two goal night in the contest and picked up first star honours. The Raiders are 19-6-3-1 and they are led by Alexei Protas with 42 points (18G, 24A). Protas is currently representing Team Belarus at the 2020 2020 U20 World Championship Division 1 Group A Tournament. After tonight’s battle, the Raiders will host the Winnipeg ICE Friday night.

Brett Kemp suited up for his 200th career WHL game last night against the Saskatoon Blades. In his WHL career, the 19-year-old Yorkton product has 65 goals and 79 assists. Kemp is a smart, fast forward that has good hands and a great shot. Look for him to control the play and create opportunities for the Tigers in tonight’s battle.