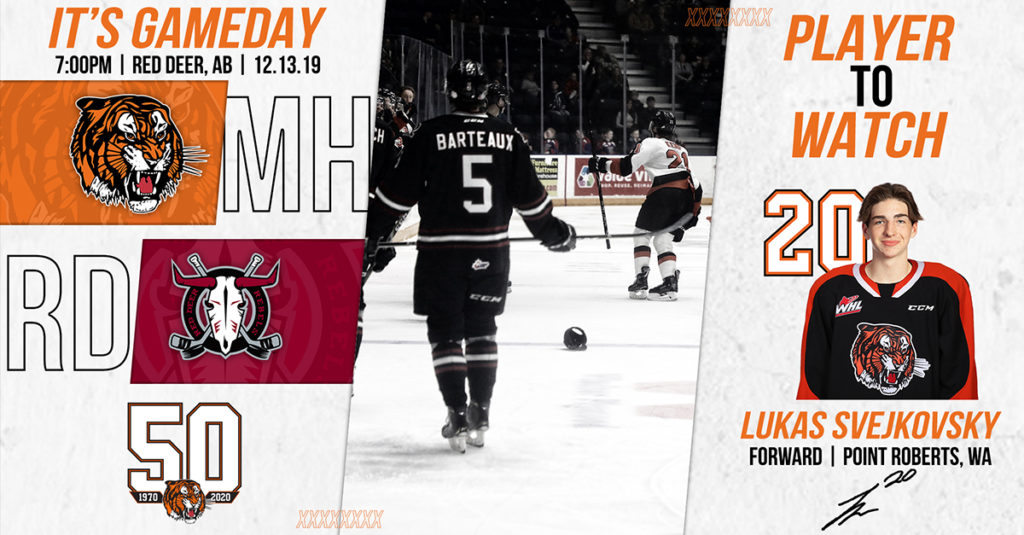 The Medicine Hat Tigers scored four unanswered goals in the final frame to defeat the Prince Albert Raiders 8-4 on Wednesday night. Veteran forwards Brett Kemp and Ryan Chyzowski each scored hat tricks in the contest while linemate, rookie forward Cole Sillinger had a 6 point night (1G, 5A). The Orange and Black are now 22-8-1-0 and they are led by their Captain James Hamblin with 49 points (17G, 32A). After tonight’s game in Red Deer, the Tigers will return home to host the Edmonton Oil Kings for their final game before the holiday break.

Tonight’s matchup will be the fourth meeting between the Tigers and the Rebels this season. The Rebels won the first contest 4-3 in overtime before the Tigers took the next two games, 9-1 and 4-3 in a shootout. Captain James Hamblin leads the Tigers with 5 points (2G, 3A) in the series so far. The Tigers are 15-5-1-0 against the Rebels over the past five years and 8-2-0-0 when playing in Red Deer. After tonight, these two clubs won’t meet again until March 10th, 2020, in Medicine Hat.

The Red Deer Rebels fell 4-2 to the Lethbridge Hurricanes on Wednesday night in Lethbridge. Rookie forward Jace Isley scored his first career WHL goal in the contest. Red Deer is now 10-17-0-3 and they are led by Arshdeep Bains with 21 points on the season. The Rebels return home to host the Medicine Hat Tigers tonight and the Swift Current Broncos on Saturday before their holiday break.

Lukas Svejkovsky is an 18-year-old skilful centre in his first year of NHL Draft Eligibility. The Point Roberts, Washington product joined the Tigers December 7th, 2019, from the Vancouver Giants along with veteran defenceman Dylan Plouffe. Svejkovsky plays with finesse and has a high hockey IQ. In his first three games with his new squad, Svejkovsky has two goals.

Captain James Hamblin is leading the league in scoring with 49 points (17G, 32A). The 20-year-old Edmonton is also leading the league in assists with 32 and he recorded his first five point night of his career (all assists) on Tuesday against the Blades. Hamblin is a speedy, hard working forward who leads the Tigers by example. Look for the Captain to make an impact in tonight’s contest.