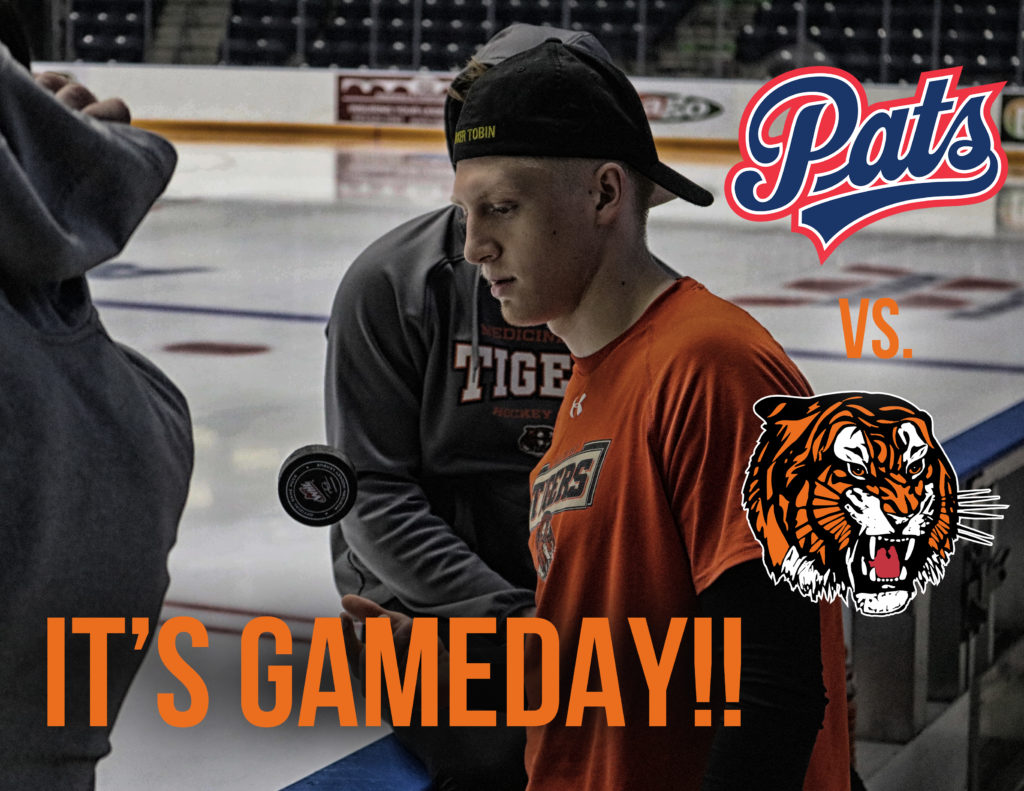 The Medicine Hat Tigers return home from a three-game road trip where they posted a 2-1-0-0 record to host the Regina Pats. The Tigers had opened their Eastern road trip in Regina where they defeated the Pats 3-2. Tuesday night, the Tabbies tangled with the Wheat Kings and fell 4-1 before stopping in Moose Jaw Wednesday night to take down the Warriors 6-5 in overtime. The Orange and Black are 14-14-1-2 so far this season and they are led by Captain James Hamblin with 33 points (14G, 19A) and Alternate Captain Ryan Jevne with 28 points (12G, 16A).

The Tigers and the Pats have met twice this season, both times in Regina. Medicine Hat took the first game 8-5 on October 26th and the second game 3-2 on December 2nd. The Tigers’ penalty kill is 83.3% effective (1/6) and the power play is 40% effective (4/10) against the Pats this season. Over the past five years, the Tabbies are 5-8-0-1 against the Pats and will look to improve their record tonight. After tonight’s contest, the Tigers and the Pats will meet one more time this season in Medicine Hat on Jan 11th, 2019.

The Regina Pats are 8-21-0-1 so far this season and lost 4-3 in a shootout last night against the Red Deer Rebels. Last week the Pats participated in a trade with the Lethbridge Hurricanes and acquired Jadon Joseph, Ty Kolle and seven draft picks while they sent Jake Leschyshyn and Nick Henry to Lethbridge. Both Joseph and Kolle picked up points against the Tigers during Sunday’s showdown in Regina.

Daniel Baker earned the second star of the night honours in his career best game against the Moose Jaw Warriors on Wednesday night. The 17-year-old Edmonton, AB native scored his first career WHL goal that night and picked up two assists for his first multi-point game. Baker is a calm, collected player with a great ability to the read the play. Look for Baker to make an impact on the defensive end for the Tigers tonight.

Captain James Hamblin is the hard working 19-year-old forward who steps up every game and consistently gets the job done. The Edmonton, AB product is not afraid to battle for the puck, set his teammates up and find the back of the net himself. Hamblin has 14 goals and 19 assists so far this season and is the Tigers’ top point producer. The Captain leads the team by example on and off the ice as he has been involved in every community outreach event the Tigers have been a part of this season. Look for the Captain to lead the way for his team tonight.

The Home Depot opened its doors in Canada in 1994 and caters to do-it-yourselfers, as well as home improvement, construction and building maintenance professionals. Don’t forget to purchase a team puck, signed by Tigers players from the Home Depot table located on the concourse. The lucky fan who purchases the one ‘Mystery Puck’ signed in gold sharpie will go home with a $100 gift card to the Home Depot. All funds raised will be donated to the McMan Youth Family and Community Services Association, through the Home Depot Canada Foundation.

Medicine Hat Society for the Prevention of Cruelty to Animals (MHSPCA) was incorporated on October 15th, 1979. Thousands upon thousands of homeless, sick and injured animals have received medical help, been vaccinated, spayed/neutered, microchipped and have found new and loving forever homes because of MHSPCA.