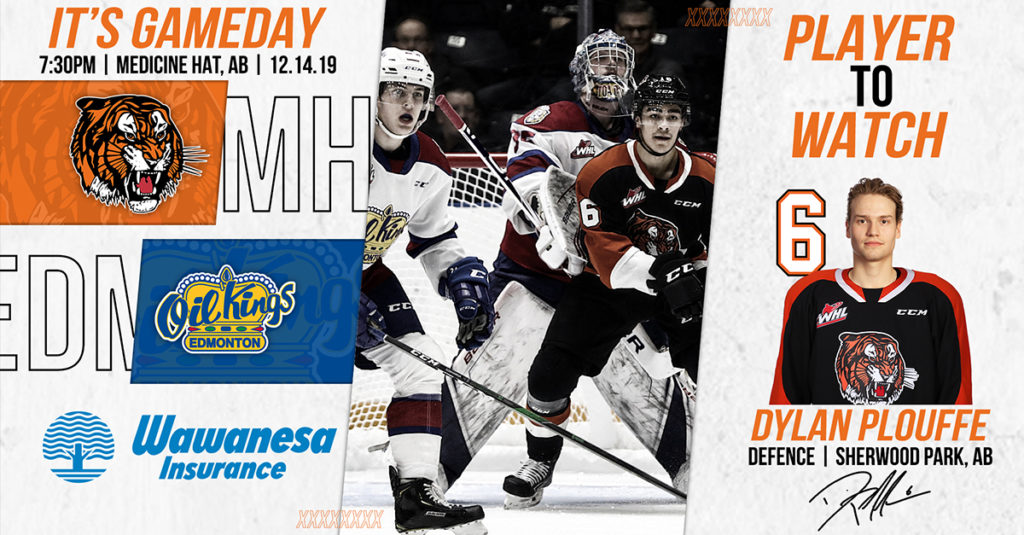 The Medicine Hat Tigers have had a busy week playing three games in the last four days and they will finish it off tonight against the first place Edmonton Oil Kings for their last game before the holiday break. The Tigers started the week off in Saskatchewan taking down the Saskatoon Blades 11-3 Tuesday night before defeating the Prince Albert Raiders 8-4 on Wednesday. Last night the Tabbies travelled to Red Deer and fell 6-4 to the Rebels. The Tigers are 22-9-1-0 and they are led by their Captain James Hamblin with 51 points (18G, 33A).

For the third time this season, the Tigers will battle the Oil Kings. In both previous games, the home team has come out on top. The Oil Kings won the first meeting 4-2 at Rogers Place in October before the Tigers took the second game 5-1 at the Canalta Centre in November. Captain James Hamblin leads the Tigers in points in the series with four (2G, 2A). Over the past five years, the Tabbies are 14-4-2-0 against the Oil Kings and 8-0-2-0 when playing at home. After tonight, the next meeting between these two clubs will be January 19, 2020, in Edmonton.

The Edmonton Oil Kings hosted the Swift Current Broncos for a pair of games this week and they won both. Wednesday night they defeated the Broncos 3-1 before beating them 5-1 last night. Veteran forward Riley Sawchuk led the way for the Oil Kings in the two games with 4 points (1G, 3A). Sawchuk also leads the Oil Kings in points with 40 (13G, 27A). The Oil Kings are  21-6-5-2 and are first in the league.

Dylan Plouffe is a smooth skating veteran defenceman who was acquired by the Tigers December 7, 2019, from the Vancouver Giants along with forward Lukas Svejkovsky. Both players have fit in well with the Tigers culture. Plouffe, the 20-year-old Sherwood Park product, is a hard nosed two-way defenceman that plays a tenacious stay at home game.

Captain James Hamblin is leading the league in scoring with 51 points (18G, 33A) and in assists with 33. Since being drafted by the Tigers in the first round of the 2014 Bantam Draft, the 20-year-old Edmonton native has suited up for 293 games, scored 97 goals and produced 146 assists. Hamblin is a fierce forechecker who leads the Tigers by example with his hard work ethic and he is able to make an impact at both ends of the ice every evening.

Wawanesa Insurance is a Canadian mutual company owned by its policyholders. It is one of the largest property and casualty insurers in Canada. Wawanesa is holding a toy drive for the Medicine Hat News Santa Claus Fund and fans are encouraged to bring a new and unwrapped toy to donate at tonight’s game. Wawanesa Insurance is the official home and auto insurance company of the CHL.

Medicine Hat News Santa Claus Fund is a charitable organization serving Southeast Alberta. They support children, families, and individuals in need during the holiday season. The organization was established in 1986 by the Medicine Hat News. They saw a need in our community during the holiday season and they wanted to assist. Now, 33 years later, they can say they’ve helped 10,000’s of families in our community.