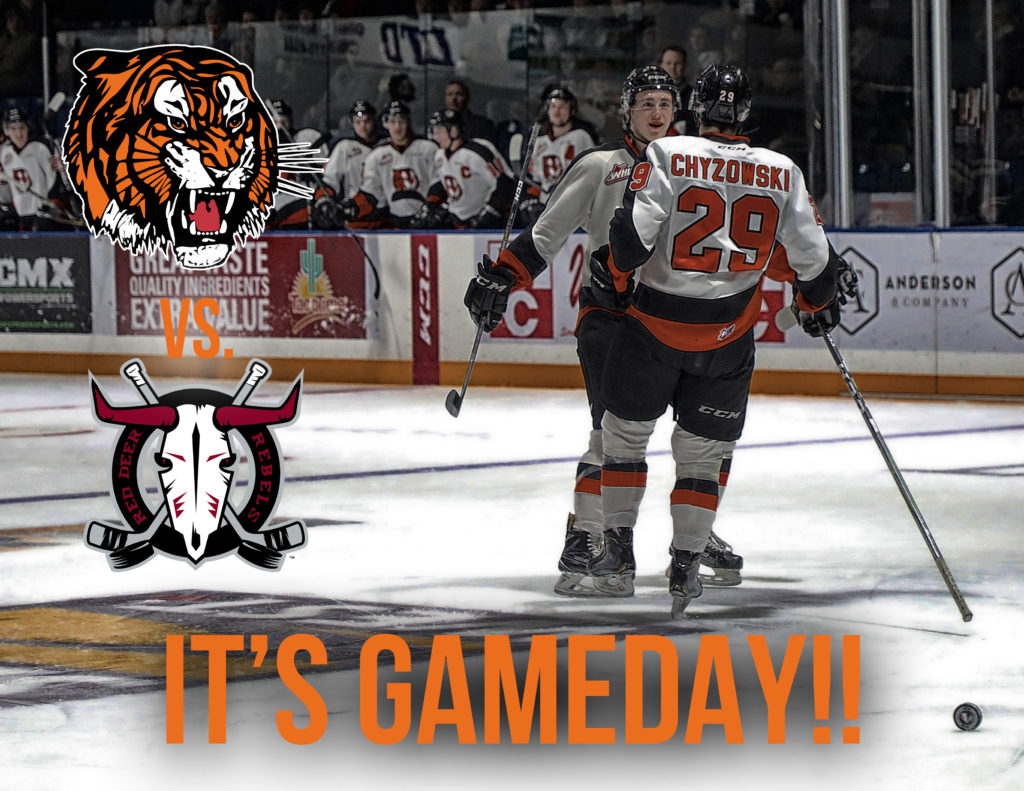 The Medicine Hat Tigers extended their winning streak to three games after defeating the Kamloops Blazers 4-2 on Wednesday. Alternate Captain Ryan Jevne scored his 50th career WHL goal in the contest as well as the game winner. Jevne now has 8 points (6G, 2A) in the last three games. The Orange and Black are 16-14-1-2 and will return home after tonight’s game to host the Kelowna Rockets Saturday for their final game before the Christmas break.

The Tigers and the Rebels will meet for the fourth time this season tonight in Red Deer. The Orange and Black have won all three previous meetings including a recent 6-2 victory on November 28th. Over the past five seasons, Medicine Hat is 10-10-0-1 against Red Deer. Although the Tigers have won the previous meetings, the Rebels are the top team in the Central and the Tigers will come into the game with an underdog mentality.

The Red Deer Rebels defeated the Kamloops Blazers 2-1 on Tuesday for their third consecutive win. Red Deer is currently sitting first in the Central Division with a 20-9-2-0 record. They are led by 2016 Buffalo Sabres draft pick Brandon Hagel with 51 points (21G, 30A) and 2018 Washington Capitals draft pick Alexander Alexeyev with 31 (7G, 24A).

Corson Hopwo is a skilled forward in his first season with the Orange and Black. The 17-year-old Duncan BC native has had the opportunity to play on the first line which has helped build his confidence. Hopwo brings energy, speed, high hockey IQ and good footwork into every game. Look for Hopwo to make an impact on both ends of the ice tonight.

Captain James Hamblin is a shifty forward with deceptive speed who leads the Tigers in points this season (15G, 20A). Hamblin has a great hockey sense and a tireless work ethic. He often leads the team by example by stepping up and consistently getting the job done. Hamblin is not afraid to battle for the puck, set his teammates up or find the back of the net himself. Look for the 19-year-old Edmonton native to drive to the net and create scoring opportunities tonight for the Tabbies.