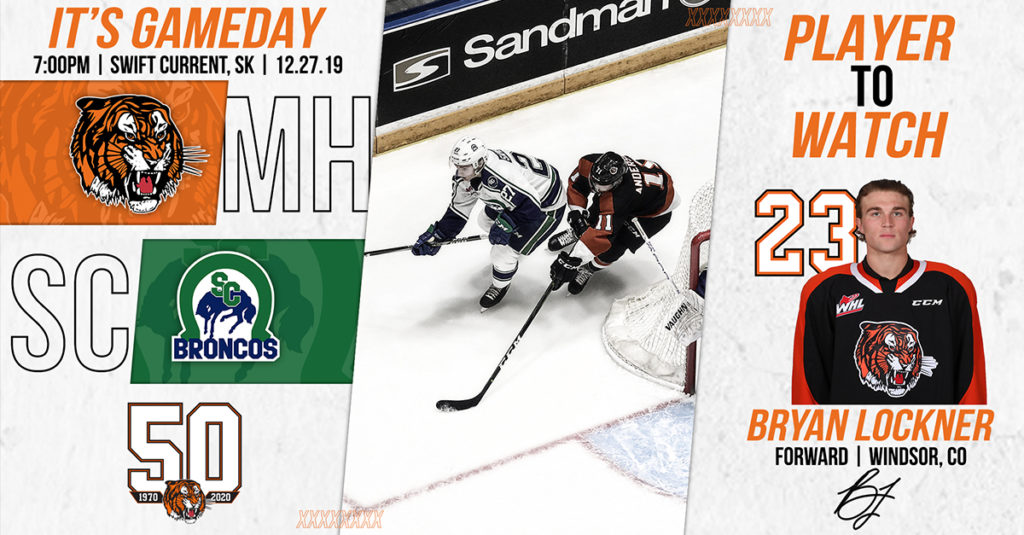 The Medicine Hat Tigers finished the first half of their 50th anniversary season with a 22-10-1-0 record. Although the Tigers lost their last two matches before the holiday break, they will be looking to return to their winning ways in tonight’s contest with the Swift Current Broncos. After tonight, the Tabbies will return home to host the Calgary Hitmen for the first of three back to back games with Calgary over the next week. The Tigers are led by their Captain James Hamblin with 52 points (18G, 34A).

For the third time this season, the Tigers will face off against the Broncos. The two previous meetings between these two hockey clubs were during a home and home series in late September. The Tigers defeated the Broncos 2-0 in Swift Current before winning 10-1 in Medicine Hat the next night. Captain James Hamblin has five points (2G, 3A) in the series so far. Over the past five years, Medicine Hat is 10-4-0-0 against Swift Current and 4-3-0-0 when playing at the Credit Union iPlex. The next battle between these two teams will be a home and home series Jan 28 in Medicine Hat and Jan 31 in Swift Current.

The Swift Current Broncos finished the first half of the season with a 6-22-1-2 record and they will be hungry for a win in tonight’s game. After tonight the Broncos will play a home and home series against the Lethbridge Hurricanes. Saturday they will travel to Lethbridge before returning home to host the ‘Canes on Monday. The Broncos are led by veteran forward Ethan Regnier with 15 points (7G, 8A).

Bryan Lockner is a hardworking, gritty forward in his third season with the Orange and Black. The 19-year-old Windsor CO product has a lethal shot and a powerful stride. This season Lockner has shifted from the wing to playing centre because of his ability to be a two-way forward. Look for Lockner to make an impact in both ends of the ice tonight.

Captain James Hamblin is tied for first in the league in scoring with 52 points (18G, 34A) and leading the league in assists with 34. The 20-year-old Edmonton product is an offensive generator for the Tigers and a fierce forechecker who leads his team by example with his tireless work ethic. Since being drafted in the first round of the 2014 Bantam Draft by the Tigers, Hamblin has played 294 games, scored 97 goals and collected 147 assists.