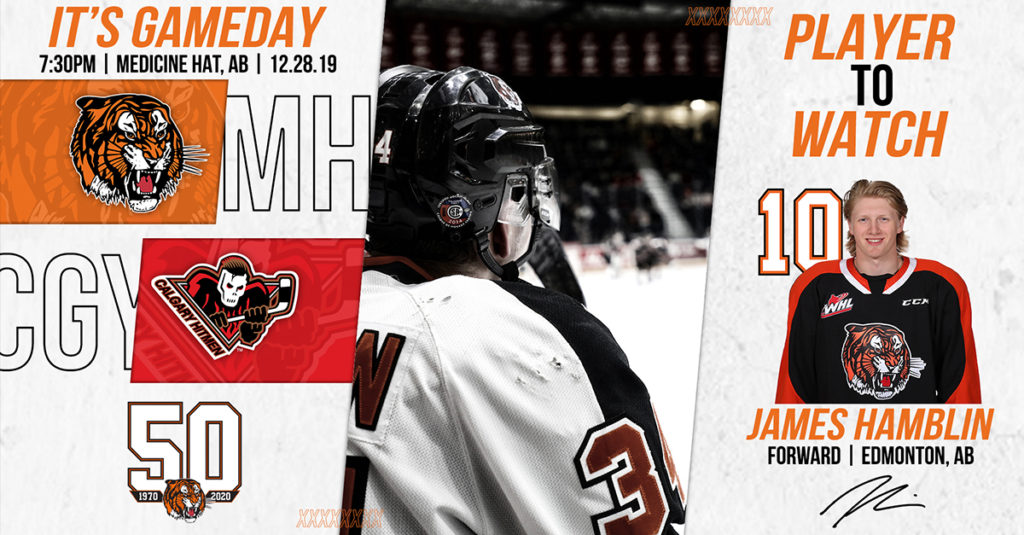 The Medicine Hat Tigers came from a 3-1 deficit in the first period to force extra time last night but fell in the sixth round of a shootout 4-3 to the Swift Current Broncos. Ryan Chyzowski scored a pair of goals while Dylan Plouffe scored his first goal as a Tiger with 19 seconds left in regulation on the power play to pick up a point in the contest for the Tabbies. The Orange and Black are 22-10-1-1 and they are led by their Captain James Hamblin with 53 points (18G, 35A).

Tonight’s game between the Tigers and the Hitmen will be the first of three consecutive games and their third meeting of the season. Calgary hosted both previous contests and came out on top 2-0 in September and 6-3 in October. Medicine Hat is 10-8-2-0 against Calgary in the past five years and 6-2-1-0 when playing at home. Rookie forward Cole Sillinger leads the Tigers against the Hitmen with three points (1G, 2A) in two games played. After tonight, the Tigers will travel to Calgary for an afternoon New Year’s Day meeting before returning home January 3rd to host the Hitmen again.

The Calgary Hitmen fell 5-4 to the Lethbridge Hurricanes in overtime last night. Riley Stotts had a three point night (1G, 2A) in the contest. After tonight’s game in Medicine Hat, the Hitmen will return home to play the Edmonton Oil Kings on Monday before hosting the Tigers for a rematch Wednesday then returning to the Canalta Centre Friday. The Hitmen are 16-10-4-1 and they are led by Stotts with 35 points (16G, 19A) and Mark Kastelic with 32 points (18G, 14A).

Captain James Hamblin is tied in second for top scorer in the league with 53 points (18G, 35A) and he is leading the league in assists with 35. The 20-year-old Edmonton product was drafted in the first round of the 2014 Bantam Draft by Medicine Hat and he has since suited up for 295 games, scored 97 goals and collected 148 assists. Hamblin is consistently one of the Tigers’ top players who can be counted on in all situations. Look for him to make an impact in tonight’s game.

Persian Dreams & Canine Themes Rescue Society has been active and helping to save, care for, and re-home animals in Medicine Hat for the past 12 years. They are a provincially and federally registered charity who receives no government funding. PDCT was created on the philosophy that all life is precious and deserves to be lived to the fullest with appropriate shelter, food and care. They have a strict NO KILL policy and they will do everything in their power to save animals – who others may turn away or choose to euthanize without a second thought. Their mission is to find permanent loving homes for all the animals in their care and for those yet to come.