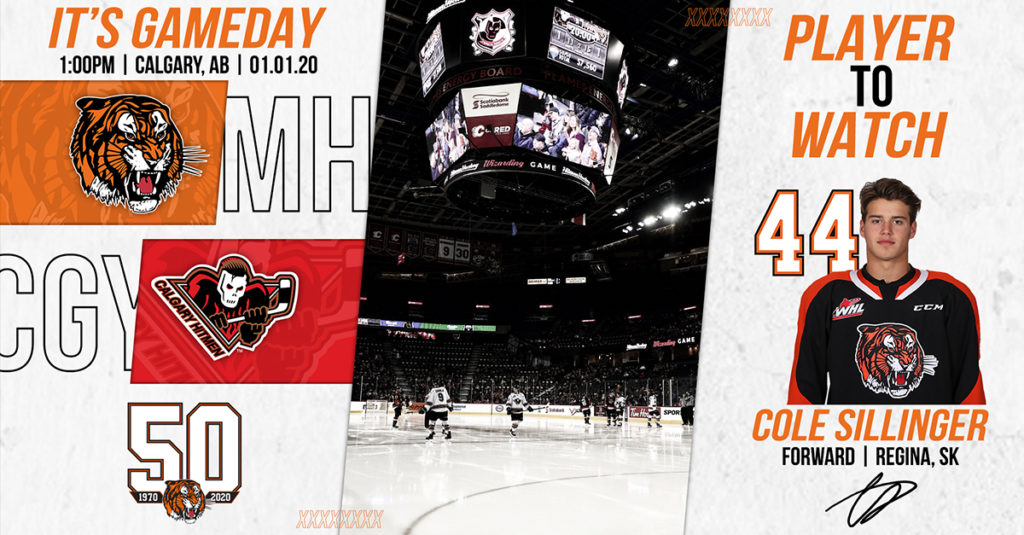 The Medicine Hat Tigers returned to action after their holiday break and fell 4-3 in a shootout to the Swift Current Broncos Friday before defeating the Calgary Hitmen 3-1 on Saturday. The Orange and Black scored three goals in the first period against the Hitmen while goaltender Mads Søgaard stopped 33 of 34 shots faced in the contest to win the game. The Tigers are 23-10-1-1 and they are led by their Captain James Hamblin with 54 points (19G, 35A). After this afternoon’s contest, the Tabbies will return home to host the Hitmen Friday and the Seattle Thunderbirds on Saturday before departing to Manitoba to play Brandon Tuesday and Winnipeg Wednesday.

The Tigers and the Hitmen face off this afternoon for their fourth meeting this season and second in five days. In their head to head series so far this season, the home team has won every contest. Calgary won 2-0 in September and 6-3 in October at the Saddledome while Medicine Hat won 3-1 this past Saturday at the Canalta Centre. Cole Sillinger is leading the series for the Tigers with four points (1G, 3A) in three games played. Over the past five years, the Tabbies are 11-8-2-0 against the Hitmen and 4-6-1-0 when playing in Calgary. After today, both teams will travel to Medicine Hat for a rematch on Friday night.

The Calgary Hitmen returned from their holiday break to play seven games in ten days. In their first weekend back, they fell 5-4 in overtime to the Lethbridge Hurricanes Friday before losing 3-1 to the Medicine Hat Tigers Saturday. On Monday, the Hitmen hosted the Edmonton Oil Kings and defeated them 5-3. After today’s battle with the Tigers, the Hitmen will travel to Medicine Hat Friday and Lethbridge on Saturday before returning home to host Moose Jaw Sunday. Calgary is 17-11-4-1 so far this season and they are led by Riley Stotts with 36 points (16G, 20A).

Cole Sillinger is leading the league in rookie scoring with 37 points (12G, 25A) in 30 games played. The 16-year-old Regina product is a skilled, hardworking forward with a lethal shot. He displays tremendous puck skills and possesses a high hockey IQ. In the month of December, Sillinger picked up 14 points (2G, 12A) in nine games including a career high six point (1G, 5A) night against the Saskatoon Blades. Look for Sillinger to make an impact in this afternoon’s game.

Captain James Hamblin is the Tigers most consistent player and he is leading his team in points with 54 (19G, 35A). The 20-year-old Edmonton product is third in league scoring and tied in second for most assists in the league with 35. Hamblin is relied on in every situation for the Tigers and he leads the team by example with his hard work and dedication. Since being drafted in the first round of the 2014 bantam draft by the Tabbies, he has suited up for 296 games, scored 98 goals and collected 148 assists.