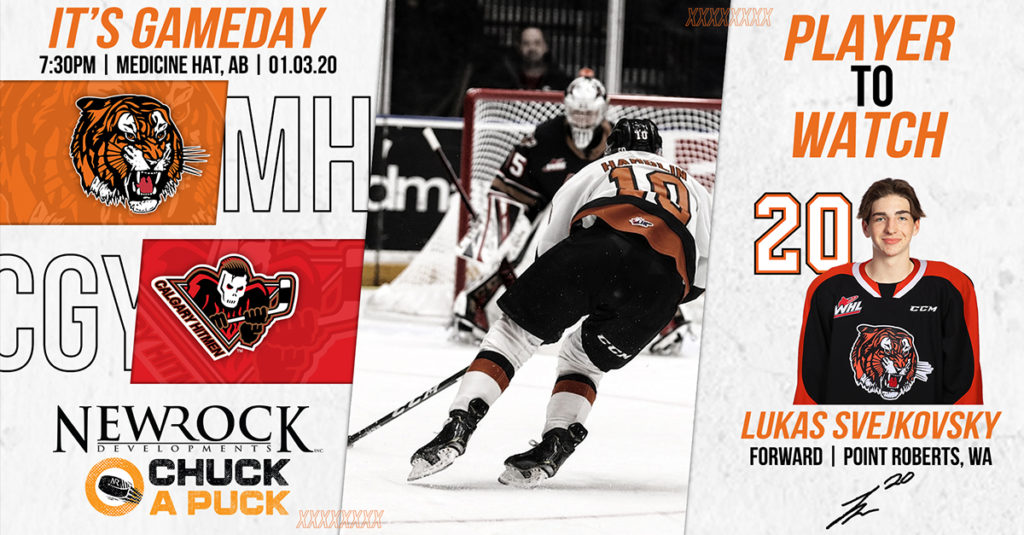 The Medicine Hat Tigers host the Calgary Hitmen tonight for the third meeting in the course of a week between these two hockey clubs. The Tigers defeated the Hitmen 3-1 Saturday in Medicine Hat before falling 4-2 on Wednesday in Calgary. The Orange and Black are 23-11-1-1 and they are led by their Captain James Hamblin with 55 points (19G, 36A) and veteran forward Brett Kemp with 43 points (16G, 27A). After tonight’s game, the Tabbies will host the Seattle Thunderbirds on Saturday before departing early next week to Manitoba to take on the Brandon Wheat Kings Tuesday and the Winnipeg ICE on Wednesday.

Tonight’s game between the Tigers and the Hitmen will be their third meeting in seven days and their fifth battle of the season. The Hitmen won all three games played at the Saddledome and the Tabbies have won the lone game played at the Canalta Centre. After tonight, Medicine Hat and Calgary will not meet again until March 6th at the Canalta Centre. The Tigers are 11-9-2-0 against the Hitmen over the past five years and 7-2-1-0 when playing at home. A trio of Tigers have four points in the four games played in the series so far – Ryan Chyzowksi (3G, 1A), James Hamblin (1G, 3A) and Cole Sillinger (1G, 3A).

Tonight’s game against the Tigers will be the Calgary Hitmen’s fifth game in eight days since returning from their holiday break. The Hitmen are 2-1-1-0 since returning from the break and 18-11-4-1 overall this season. Calgary is led by veteran forward Riley Stotts with 36 points (16G, 20A) and their captain Mark Kastelic with 34 points (19G, 15A). After tonight’s game with the Tigers, the Hitmen will travel to Lethbridge to play the Hurricanes Saturday before returning home to host the Moose Jaw Warriors Sunday.

Lukas Svejkovsky is a very skilled player with high end speed. The 2020 NHL Draft Eligible from Point Roberts, WA, has high hockey IQ and he is very responsible away from the puck. Svejkovsky joined the Tabbies in December from the Vancouver Giants along with veteran defenceman Dylan Plouffe. In his eight games played for the Orange and Black, Svejkovsky has 4 points (3G, 1A) including the first WHL goal of the 2020 decade.

Captain James Hamblin is the Tigers top point producer with 55 points (19G, 36A). The 20-year-old Edmonton product is third in the league in scoring and second in the league for assists with 36. Hamblin was drafted by the Tigers in the 2014 WHL bantam draft and he has suited up for 297 games, scored 98 goals and collected 149 assists. He is one of the Tigers most consistent players, a fierce forechecker and a tireless worker. Look for Hamblin to make an impact in tonight’s tilt.

Praxis Science Outreach Network – through their work in southeastern Alberta, Praxis strives to empower leaders in science and technology. Whether it be through the use of their hands on science resources in schools, mentoring science fair students, encouraging male and female youth through their Operation Minerva or THOTH Conferences, or Family Science Olympics’ they are hopeful the youth in our communities will take the opportunities afforded to them in order to pursue a career in Science, Technology, Engineering or Math (STEM).