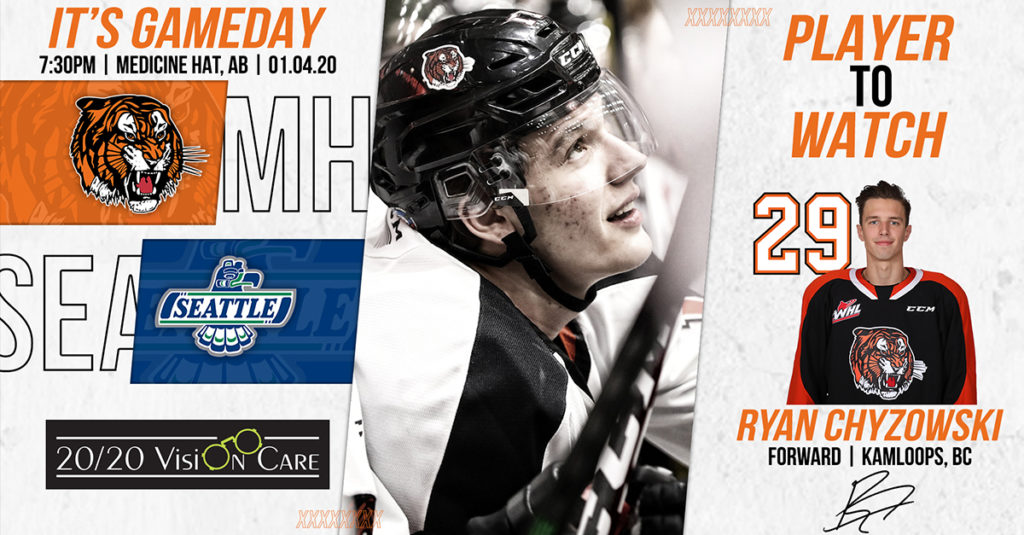 The Medicine Hat Tigers played back to back to back games against the Calgary Hitmen this past week and won two of the three matchups, including last night’s 5-2 victory. Captain James Hamblin scored his 20th and 21st goals of the season as well as his 100th career WHL goal in the contest for the Tabbies earning the first star of the night. Veteran forward Elijah Brown also added a pair of goals in the contest while sophomore forward Corson Hopwo had a two assist night. The Tigers are 24-11-1-1 and they are led by Hamblin with 57 points (21G, 36A). After tonight’s game, the Tigers will travel to Manitoba to play the Brandon Wheat Kings Tuesday and the Winnipeg ICE Wednesday.

The Seattle Thunderbirds are in the middle of a five game road trip and they are 1-1-0-0 so far on the trip. They kicked it off by falling 3-2 to Portland on Tuesday before defeating the Lethbridge Hurricanes 5-4 in overtime last night. Payton Mount scored the game winning goal in last night’s contest. Veteran forward Conner Bruggen-Cate and Florida Panthers prospect Henrik Rybinski each have three points on the road trip so far. Bruggen-Cate has two goals and 1 assist, while Rybinski has 1 goal and 2 assists. Seattle is 14-19-2-1 and they are led by Andrej Kukuca with 30 points (11G, 19A). After tonight, the Thunderbirds will travel to Swift Current and Tri-City before returning home.

Ryan Chyzowski is a skilled forward with good awareness and positioning in all three zones. He has an impressive shot with a quick release and he is a smart passer who is able to set up his teammates. The 19-year-old Kamloops, BC product has 39 points (19G, 20A) in 36 games played so far this season, including a league leading 11 power play goals. Look for Chyzowski to crash the net creating scoring opportunities tonight.

Captain James Hamblin is second in the league in scoring with 57 points (21G, 36A) and second in the league for assists with 36. The 20-year-old Edmonton product was drafted by the Tigers in the 2014 Bantam Draft and he has suited up for 298 games, scored 100 goals and collected 149 assists. Hamblin leads the Tigers by example with his hard work ethic and dedication. He is a speedy, skilled forward and a fierce forechecker. Look for Hamblin to make an impact in tonight’s game.

20/20 Vision Care is a local optometrist office that has been serving Medicine Hat and area since 1996 and they are the official eyewear suppliers of the Medicine Hat Tigers. 20/20 Vision Care prides itself on giving back to the community of Medicine Hat. Currently, they are raffling off sports paraphernalia with all proceeds going to the new local Ronald McDonald House. Make sure to stop by their booth on the main concourse tonight.

The Medicine Hat Society for the Prevention of Cruelty to Animals (MHSPCA) has been servicing Medicine and surrounding areas for 41 years. The mission of the MHSPCA is to provide protective care for sick, injured and unwanted animals. Through their community programs, they strive to promote humane attitudes and responsible pet ownership.