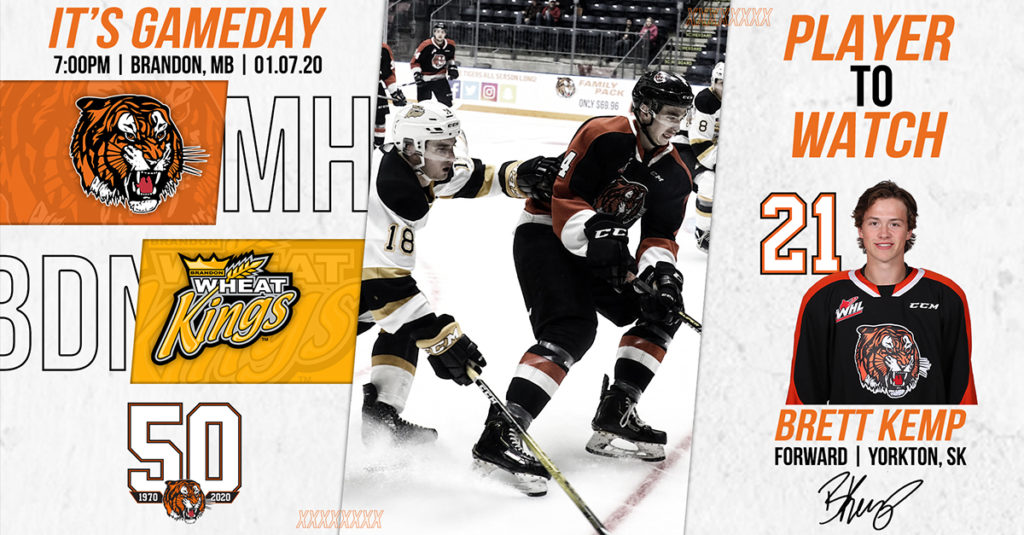 The Medicine Hat Tigers won back to back home games this past weekend. On Friday night, they defeated the Calgary Hitmen 5-2 before winning 8-5 on Saturday against the Seattle Thunderbirds. Fourteen Tigers had a point or more over the weekend and leading the way was Brett Kemp with five points (2G, 3A). The Tigers are 25-11-1-1 and they are led by their Captain James Hamblin with 59 points (23G, 36A). After tonight’s game against the Brandon Wheat Kings, the Tigers will travel to Winnipeg to play the ICE on Wednesday. This upcoming weekend, the Tabbies will play a home and home series against the Moose Jaw Warriors who they will host Friday night at the Canalta Centre.

In their only meeting so far this season, the Brandon Wheat Kings blanked the Medicine Hat Tigers 4-0 at the Canalta Centre Nov 19, 2019. The last time the Tigers defeated the Wheat Kings was March 9, 2019, in a 4-2 contest at the Canalta Centre. Over the past five years, Medicine Hat is 6-4-3-0 against Brandon and 2-3-1-0 when playing at Westoba Place. After tonight’s battle, these two hockey clubs will meet two more times, Feb 1st in Medicine Hat and Feb 7th in Brandon.

The Brandon Wheat Kings have won their past four games going into tonight’s battle including both tilts this past weekend with goaltender Jiri Patera shutting out the Prince Albert Raiders 1-0 on Friday and the Regina Pats 5-0 on Sunday. 2002 born forward Ridly Greig had a three point game Sunday (all assists) while Colorado Avalanche draft pick Luka Burzan added a pair of goals. The Wheat Kings are 19-17-1-2 and they are led by Burzan with 41 points (20G, 21A). Tonight’s game against the Tigers will be the Wheat Kings’ first of a four game homestand where they will face Red Deer, Prince George and Calgary.

Brett Kemp recorded his third multi-goal game of this season and his 10th of his WHL career on Saturday against the Seattle Thunderbirds. The 19-year-old Yorkton, SK forward scored twice and collected two assists extending his point streak to eight points (3G, 5A) in five games played since returning from the holiday break. Kemp has 48 points (18G, 30A) in 38 played. He is a smart two-way forward with a deadly shot release and a knack for scoring important goals. Kemp has great vision and he is also versatile with his ability to play centre or wing.

Tonight’s game will be Captain James Hamblin’s 300th career WHL game. Which places him 10th in franchise history for most games played for the Tigers. Hamblin scored his 100th career goal Friday against the Calgary Hitmen which made him the 32nd Tiger to score 100 goals with the franchise. Since being drafted by the Tigers in the 2014 bantam draft, the 20-year-old Edmonton product has scored 102 goals and collected 149 assists. He is currently tied for top scorer in the league with 59 points (23G, 36A). Hamblin is a hard working two-way forward who leads his team by example. Look for Hamblin to make an impact in tonight’s tilt.