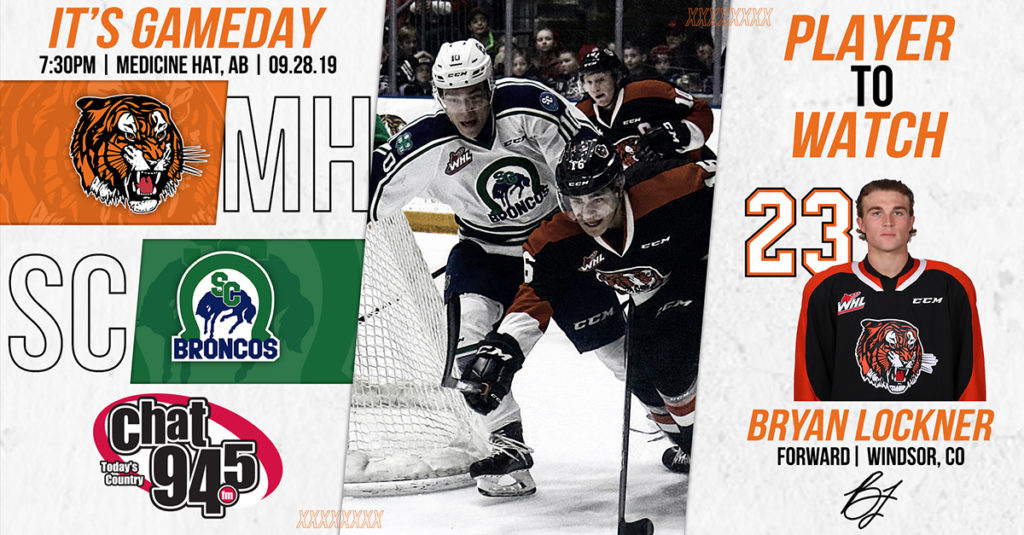 The Medicine Hat Tigers opened their home and home series with the Swift Current Broncos by defeating the Broncos 2-0 last night. Alternate Captains Tyler Preziuso and Bryan Lockner each scored while goaltender Mads Søgaard turned aside all 25 shots faced to earn his first shutout of the 2019-20 season. After tonight’s tilt, the Tigers will head West on Highway One to battle the Calgary Hitmen Sunday afternoon.

Tonight marks the second meeting of eight scheduled between these two hockey clubs. The Tigers took game one last night by a score of 2-0. Over the past five years, Medicine Hat is 9-4-0-0 against Swift Current. The next time the Tigers and the Broncos will meet is December 27th, 2019, in Swift Current.

The Swift Current Broncos are now 1-1-0-0 this season after falling 2-0 to the Tigers last night. Goaltender Isaac Poulter stopped 45 of 47 shots faced and earned the first star of the night. After tonight’s game, the Broncos will return home for a four game homestand before taking off on a five game BC road trip.

Bryan Lockner is a hardworking, gritty forward in his third season with the Orange and Black. The 19-year-old Windsor CO product has a lethal shot and a powerful stride. This season Lockner has shifted from the wing to playing centre because of his ability to be a two-way forward. Look for Lockner to make an impact in both ends of the ice tonight.

Captain James Hamblin was the Tigers’ top point producer last season with 77 points (33G, 44A) in 67 games played. The 20-year-old Edmonton product picked up two assists in last night’s contest and his first points of this season. Hamblin is a fast, skilled, two-way forward who leads the Tigers by example.

Currently, Chat 94.5FM is running their Annual CHAT Food Drive for the Medicine Hat and District Food Bank to help those in need. If you’re a school, not for profit, or a business – you can be apart of the CHAT Food Drive by phoning 403.548.8282.

CF Industries is a global leader in transforming natural gas into nitrogen. The chemical processes used ensures they have the nitrogen they need to support life on earth – from fertilizer that feeds the crops that feed the wold to products that remove harmful emmissions from industrial activities.