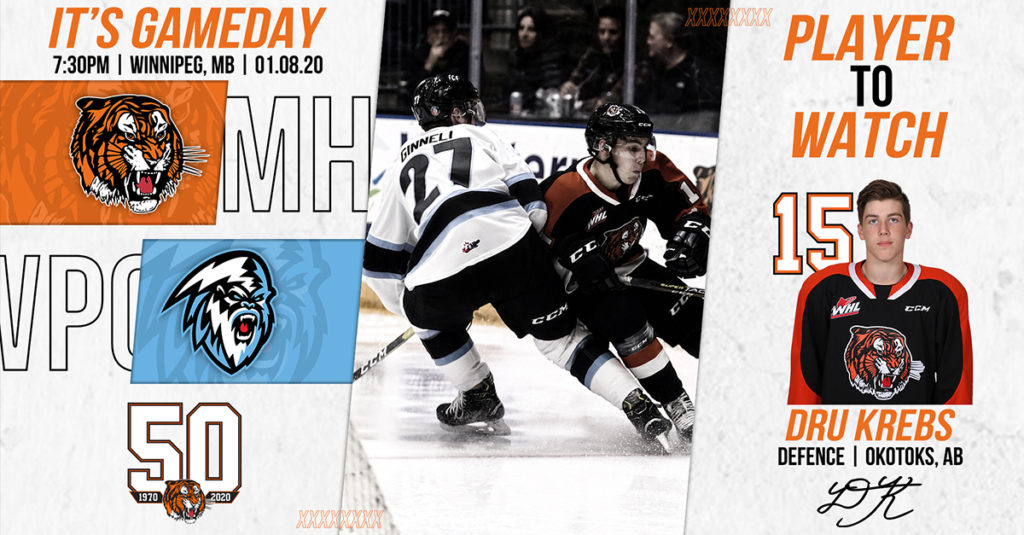 After winning back to back home games this past weekend, the Medicine Hat Tigers travelled to Manitoba for a two game road trip. They kicked off the road trip by falling 4-3 to the Brandon Wheat Kings Tuesday night after Bradon scored with one second left in the game to steal it. The Tigers will look to rebound tonight in Winnipeg as they take on the ICE. Medicine Hat is 25-12-1-1 and they are led by their Captain James Hamblin with 60 points (23G, 37A). After tonight’s game, the Orange and Black will return home to host the Moose Jaw Warriors Friday night for the first game of a home and home series.

For the first time this season, the Tigers will play in the Wayne Fleming Arena when they take on the ICE tonight. Medicine Hat hosted Winnipeg at the Canalta Centre early in the season and won 5-2. Cole Clayton, James Hamblin and Brett Kemp each picked up a pair of assists in the contest while rookie netminder Garin Bjorklund stopped 29 of 31 shots faced. The ICE franchise relocated from Kootenay to Winnipeg prior to the beginning of this season and over the past five years, the Tigers are 19-2-0-0 against the ICE and 9-1-0-0 when they played in Kootenay.

Tonight’s game against the Tigers is the Winnipeg ICE’s third home game of a nine game homestand. They began their homestand by splitting the weekend with the Prince Albert Raiders. The ICE won 6-3 on Saturday before falling 5-3 on Sunday. Nine players collected a point or more in their games against the Raiders and leading the way for the ICE were Connor McClennon and Isaac Johnson with five points (1G, 4A) each. The ICE are 24-14-1-0 and they are led by McClennon with 47 points (20G, 27A). After tonight’s tilt, the ICE will host the Red Deer Rebels Saturday.

Dru Krebs is a strong skating defenceman in his first season with the Orange and Black. The 16-year-old Okotoks native was drafted by the Tigers in the second round of the 2018 WHL Bantam draft, 38th overall. Krebs has a strong work ethic and a drive to get better every game. Add that to his hockey sense and even as a 16-year-old defenceman Krebs is able to make an impact every game. Krebs has 10 points (3G, 7A) in 35 games played so far this season.

Captain James Hamblin played his 300th career WHL game last night against the Brandon Wheat Kings. The 20-year-old Edmonton product was drafted by the Tigers in the 2014 Bantam draft and he scored 102 goals and collected 150 assists in his career. He is second in the league in scoring with 60 points, he is tied in fourth in the league for goals with 23 and he is second in the league for assists with 37. Hamblin is a hard-working, two-way centreman who leads his team by example. Look for Hamblin to make an impact in tonight’s contest.