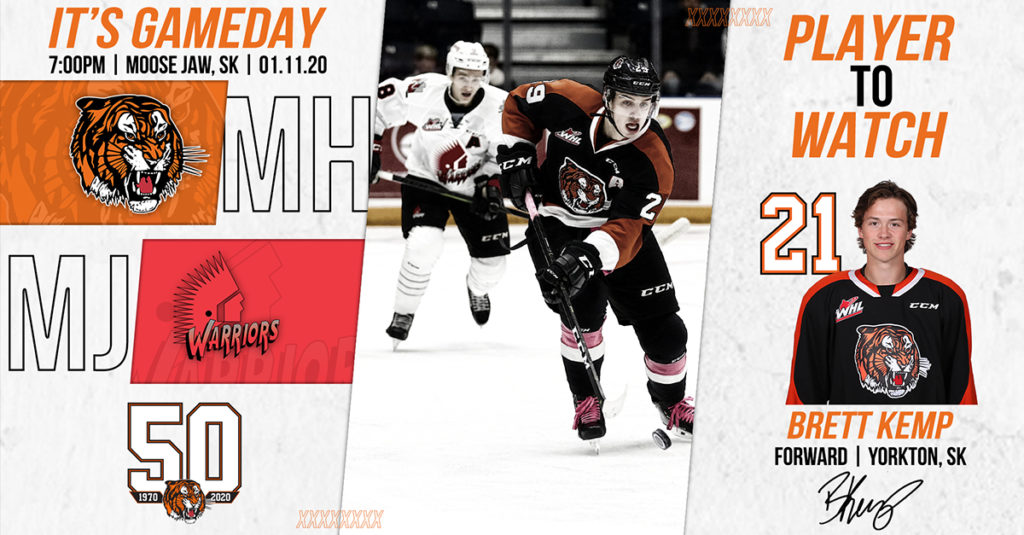 The Medicine Hat Tigers took the first game of their weekend home and home series with the Warriors 5-2. Trailing 2-1 heading into the final frame, the Tigers scored four unanswered goals, including two empty net goals, to win the game. Brett Kemp and Cole Sillinger combined on three of the four third period goals. Tonight the Orange and Black will travel to Moose Jaw for their final meeting of the season. After tonight’s game, Medicine Hat will play the Lethbridge Hurricanes at home Saturday, January 18th before travelling to Edmonton Sunday, January 19th for an afternoon date with the Oil Kings. The Tigers are 27-12-1-1 and they are led by their Captain James Hamblin with 62 points (23G, 39A).

Tonight the Tigers travel to Moose Jaw for game two of a home and home series as well as their final battle of the season against the Warriors. Medicine Hat is 3-0-0-0 against Moose Jaw so far this season. Captain James Hamblin has been leading the way for the Tigers with 6 points (3G, 3A) in the three games played between these two clubs. Over the past five years, the Tabbies are 7-6-1-1 against the Warriors and 3-3-1-0 when playing in Moose Jaw.

The Moose Jaw Warriors acquired goaltenders Boston Bilous and Brock Gould, as well as forwards Martin Lang, Logan Doust and defenceman Nolan Jones prior to Friday’s trade deadline. With new faces in their lineup, they fell 5-2 to the Tigers Friday but they will look to rebound in tonight’s rematch. Tonight’s game is the first of a four game homestand where they will host the Prince George Cougars, the Brandon Wheat Kings and the Lethbridge Hurricanes. The Warriors are 11-24-2-0 and they are led by 2021 NHL Draft Eligible Ryder Korczak with 42 points (11G, 31A).

Brett Kemp had a three point night Friday night against Moose Jaw setting up Cole Sillinger to score the game tying goal before scoring the game winning goal and adding an empty net goal. The 19-year-old Yorkton, SK product is currently fourth in league scoring with 53 points (20G, 33A). He is a smart, two-way forward with a deadly shot release and a knack for scoring important goals. Kemp sees the ice well and he has the ability to create opportunities for himself and his teammates.

Captain James Hamblin is the heartbeat of the Medicine Hat Tigers. The second year Captain leads his team by example with his hard work ethic, his dedication and his ability to be relied on in every situation. Hamblin is tied in first in league scoring with 62 points (23G, 39A) and he is second in the league for assists with 39. The 20-year-old Edmonton product has played his whole WHL career with the Orange and Black suiting up for 302 games, scoring 102 goals and collecting 152 assists.