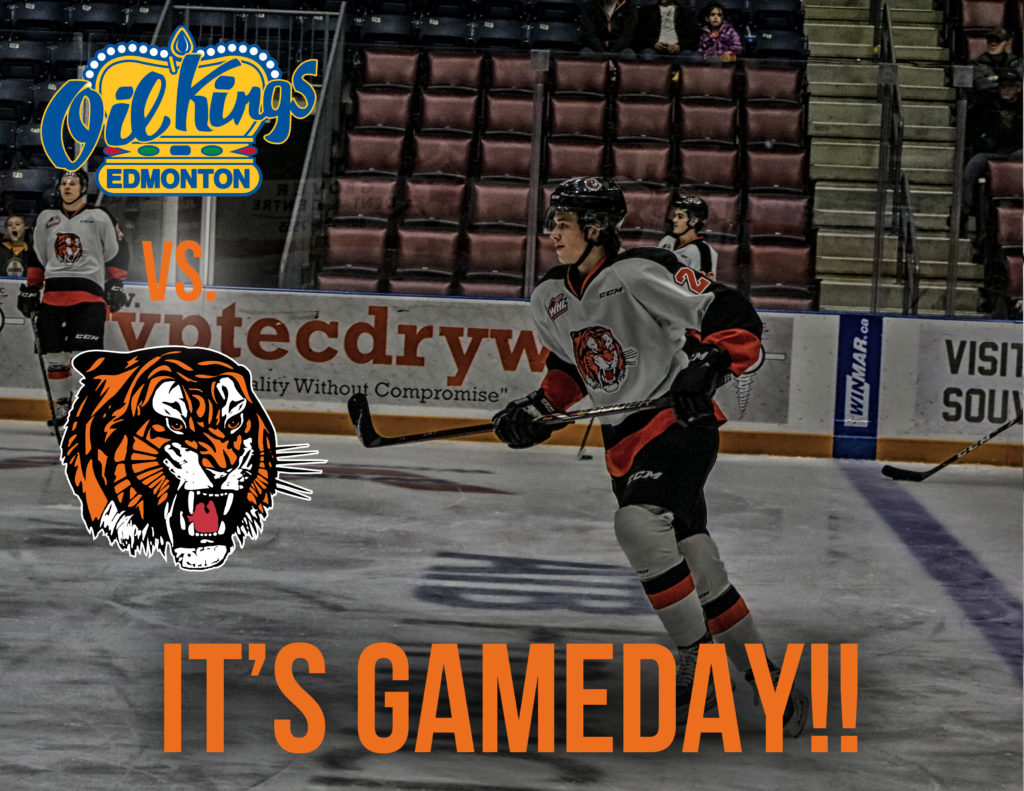 The Medicine Hat Tigers won their fifth straight home game Friday night by defeating the Regina Pats 5-2. The game was an all-around team effort with every player making an impact. Elijah Brown had his first career three-point game scoring once and picking up two assists. Newest Tiger Brett Kemp scored twice in his debut while Trevor Longo and Corson Hopwo picked up their first career two-point games with two assists each.

Tonight will be the third meeting between these two Central Division clubs. The Oil Kings have won both previous meetings, 3-2 September 26th and 4-3 in overtime on November 10th. After tonight’s battle, the Oil Kings will return home to host the Hurricanes before coming back to Medicine Hat to play Wednesday night.

The Edmonton Oil Kings played a home and home against the Lethbridge Hurricanes this week. They lost Sunday 5-2 at home and won 5-1 last night in Lethbridge. Edmonton is led by 2018 Columbus Blue Jackets draft pick Trey Fix-Wolansky with 72 points (24G, 48A) and veteran forward Vince Loschiavo with 38 points (19G, 18A).

Brett Kemp joined the Tigers at the trade deadline and did not miss a step starting his first game in Orange and Black last night against the Pats. The 18-year-old Yorkton, SK native scored two goals in his debut, including the game-winning goal on the power play. He has an explosive first step and great hands. Look for Kemp to make an impact in tonight’s contest.

Captain James Hamblin is the Tigers’ top point producer with 49 points (23G, 26A) this season. Hamblin leads the team by example with his hard work ethic and style of play. The 19-year-old Edmonton product is a speedy, two-way forward who sees the ice well. In his career as a Tiger, the former first-round bantam draft pick has 69 goals and 95 assists in 236 games played.

ATB Financial is a financial institution and Crown corporation owned by the Province of Alberta. ATB provides financial serves to over 753,000 Albertans and Alberta-based businesses. ATB has 175 branches and 141 agencies, serving a total of 243 communities in Alberta.