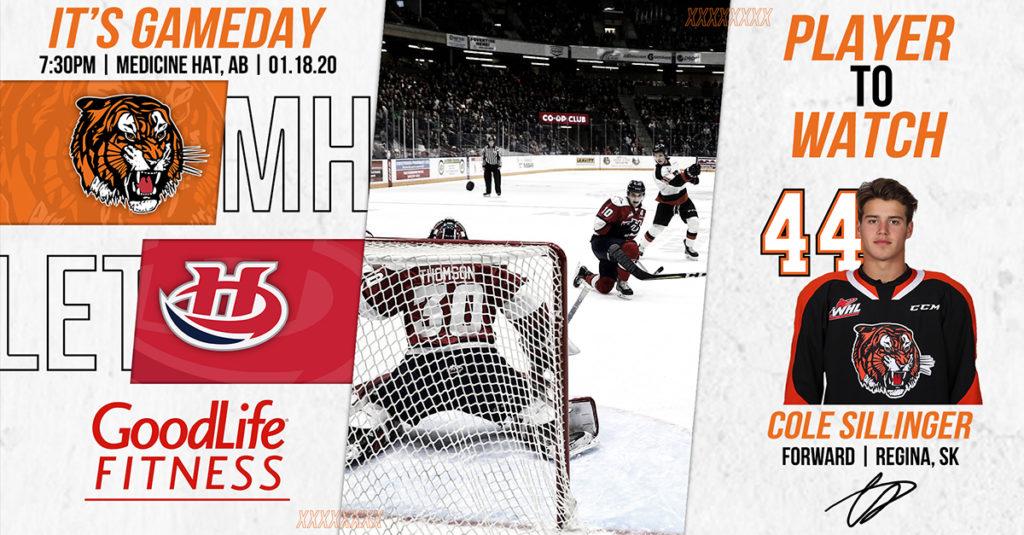 In the month of January, the Medicine Hat Tigers are 5-2-0-0 so far and overall they are 28-12-1-1 this season. After sweeping the Moose Jaw Warriors in a home and home series last weekend, the Tigers had the week off to prepare for two important games this weekend against Central Division rivals, the Lethbridge Hurricanes and the Edmonton Oil Kings. Medicine Hat will host Lethbridge tonight at the Canalta Centre then travel to Edmonton to battle the Oil Kings Sunday afternoon. The Tabbies are led by their Captain James Hamblin with 64 points (23G, 41A) and veteran forward Brett Kemp with 56 points (22G, 34A).

Tonight’s clash between the Tigers and the Hurricanes will be their sixth meeting of the season. The last time these two Central Division rivals faced off was a home and home series in early December. The Tigers won 8-3 at home December 3rd before winning 4-3 in a shootout in Lethbridge on December 6th. Medicine Hat is 4-1-0-0 against Lethbridge this season and over the past five years, they are 14-15-0-0. Brett Kemp and Cole Sillinger each have eight points (2G, 6A) against the Hurricanes this season while linemate Ryan Chyzowski has seven points (4G, 3A).

The Lethbridge Hurricanes defeated the Red Deer Rebels 4-3 in overtime last night at the Enmax Centre. Sophomore defenceman Alex Cotton scored the game winning goal just under two minutes into extra time. The Hurricanes are now 26-10-2-5 this season and they are led by their Captain Dylan Cozens with 48 points (20G, 28A) and 2019 CHL Import draft pick Oliver Okuliar with 47 points (24G, 23A). The Hurricanes are embarking on a seven game road trip starting tonight in Medicine Hat. After tonight, they will travel to Moose Jaw, Regina, Brandon, Prince Albert, Saskatoon and Red Deer before finally returning home February 8th to host the Raiders.

Cole Sillinger is leading the league in rookie scoring with 45 points (18G, 27A) in 37 games played.  He was drafted by the Tigers 11th overall in the 2018 Bantam Draft and he played up as an affiliate player in four regular season games last year picking up two assists before joining the Tabbies for their playoff run where he scored one goal in six games played. Sillinger is one of three Tigers to score in the WHL playoffs as an affiliate player in his 15 year old season, the other two are Steve Tsujiura and Trevor Linden. Sillinger has eight points (6G, 2A) in the Tigers’ last five games. The 16-year-old Regina product is a multi-faceted scoring forward with great offensive instincts and a high hockey IQ.

Captain James Hamblin is the Tigers’ top point producer with 64 points (23G, 41A) so far this season. Twenty-one of those points (6G, 15A) have come in the Tigers’ last 13 games. The 20-year-old Edmonton product leads his team by example with his hard work ethic, his dedication and his ability to be relied on in every situation. Hamblin is ranked third in the league for scoring with 64 points and third in the league for assists with 41. Look for the Captain to make an impact in tonight’s game.

Founded in 1979, GoodLife Fitness has been helping to transform the health and wellness of Canadians every day. Their purpose is to give every Canadian the opportunity to live a fit and healthy good life. GoodLife has a proud history of helping charitable and not-for-profit organizations for over 30 years through sponsored events, gift packages and volunteering.

HALO Air Ambulance is the only dedicated medevac helicopter for southern Alberta with the capability of serving southwest Saskatchewan.