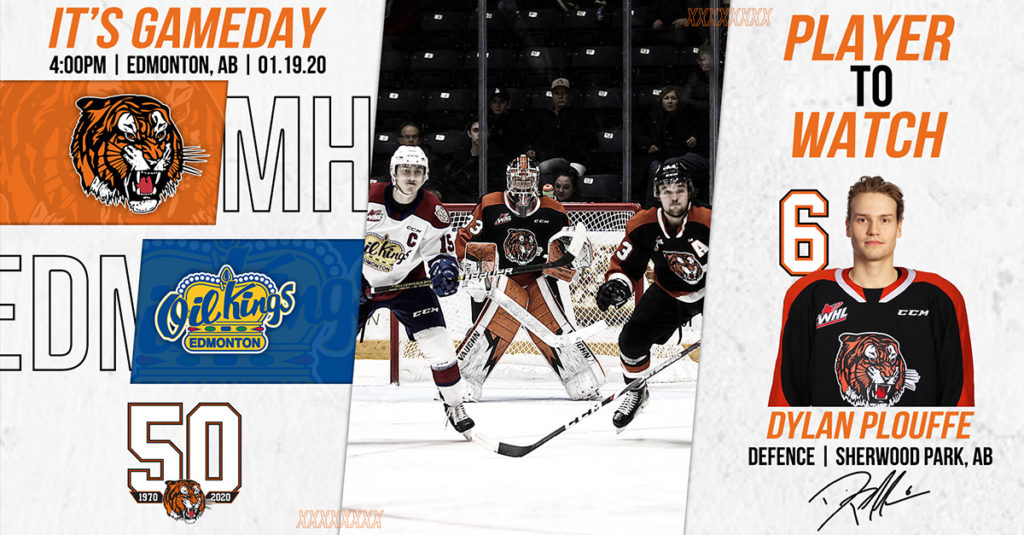 The Medicine Hat Tigers extended their winning streak to four games by defeating the Lethbridge Hurricanes 6-2 Saturday night at the Canalta Centre. Captain James Hamblin had a four goal night including a natural hat trick in the first period. The Tigers are 29-12-1-1 and they are led by Hamblin with 68 points (27G, 41A). This afternoon the Orange and Black will take on the Edmonton Oil Kings at Rogers Place.

The Edmonton Oil Kings hosted the Prince Albert Raiders on Friday night and fell 2-1 in overtime. The Oil Kings are 29-7-6-3 and they are led by veteran forward Riley Sawchuk with 52 points (16G, 36A). After this afternoon’s battle with the Tigers, the Oil Kings will travel to Saskatchewan to take on the Swift Current Broncos on Wednesday, the Prince Albert Raiders on Friday and the Saskatoon Blades Saturday.

Dylan Plouffe is a veteran defenceman acquired by the Tigers in early December. “Dylan is a very talented defender who skates well, thinks the game at a high level and has a great shot. He has the offensive ability to run our power play and also takes pride in his defensive game, which allows him to shut down other teams’ top lines. Dylan has been a great addition to our backend and has added great leadership as well,” said Assistant Coach Joe Frazer