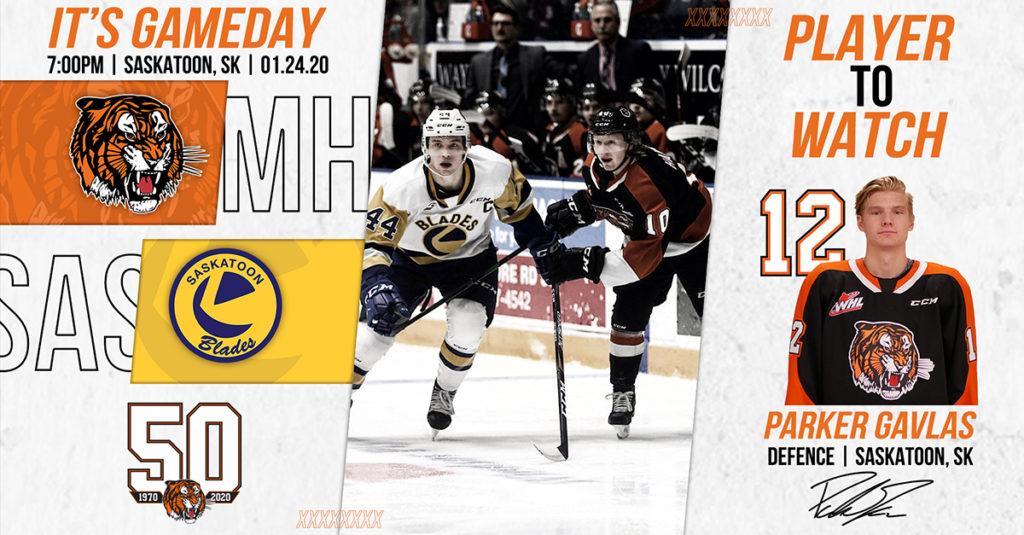 The Medicine Hat Tigers split last weekend against their Central Division rivals, the Lethbridge Hurricanes and the Edmonton Oil Kings. Saturday the Tabbies hosted the Hurricanes and defeated them 6-2 with Captain James Hamblin scoring four goals, including a natural hat trick in the first period. After Saturday’s game, the team travelled to Edmonton for an afternoon battle with the Oil Kings. The Orange and Black fell 4-2 to the Oil Kings after being tied 2-2 heading into the final frame. Medicine Hat is 29-13-1-1 and they are led by their Captain Hamblin with 69 points (27G, 42A) and veteran forward Brett Kemp with 57 points (22G, 35A). After tonight’s game in Saskatoon, the Tabbies will travel to Prince Albert to face the Raiders Saturday night.

Tonight at the SaskTel Centre, the Tigers will battle the Blades for the fourth and final time this season. In their last meeting, veteran forward Cyle McNabb scored his first career hat trick and helped the Tabbies take it 11-3. Medicine Hat is 3-0-0-0 against Saskatoon this season and Tigers Captain James Hamblin has eight points (all assists) in the three games played. Over the past five years, the Tigers are 10-4-0-1 against the Blades and 4-2-0-1 when playing at the SaskTel Centre.

The Saskatoon Blades swept the Swift Current Broncos in a home and home series last weekend. On Friday the Blades shut the door 5-0 at home before taking the Broncos down 7-2 in Swift Current on Saturday. Thirteen Blades picked up a point or more in the home and home series including veteran forward Tristen Robins who had a six point (3G, 3A) weekend. The Blades are led by Robins with 43 points (18G, 25A) and their Captain Chase Wouters with 33 points (19G, 14A). After tonight’s game against Medicine Hat, the Blades will host the Edmonton Oil Kings Saturday before travelling to Regina to take on the Pats Sunday.

Parker Gavlas is a Saskatoon product playing in his final season of the WHL. He joined the Tabbies at the beginning of the season to help bolster their defence core. “Parker is a great skater and he brings a physical presence to our blue line. He plays against the other teams’ top guys every night and plays them hard. He loves to compete and he is willing to anything to help us win,” said Assistant Coach Joe Frazer.

Captain James Hamblin has 26 points (10G, 16A) in the Tigers’ last 15 games played. The 20-year-old Edmonton product is a diminutive offensive dynamo who is leading the Tabbies in points with 69 points (27G, 42A). He is a reliable two-way centre who competes hard every game and leads his team by example. Look for Hamblin to make an impact in tonight’s game.