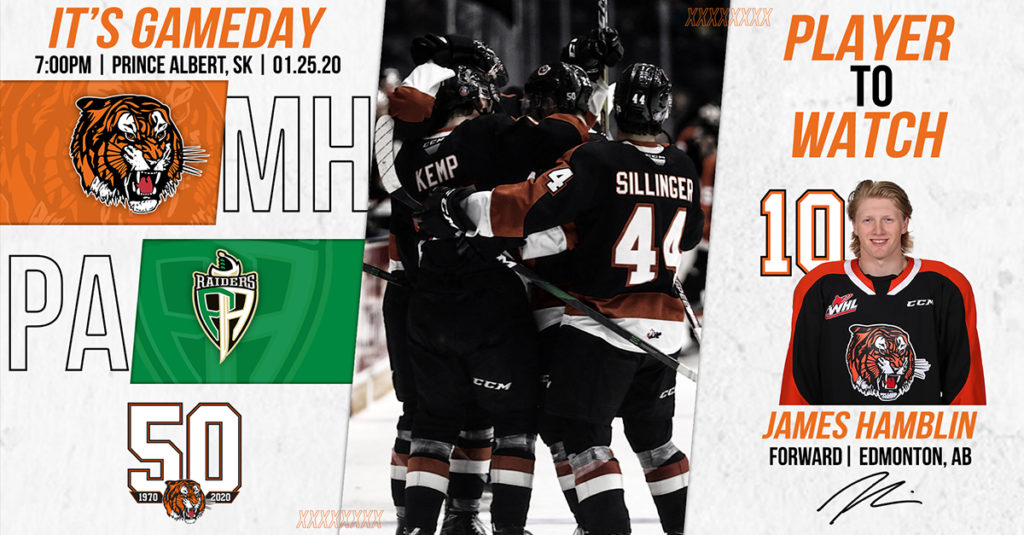 The Medicine Hat Tigers are on a two game Saskatchewan road trip that finishes off in Prince Albert tonight. Last night the Tigers took on the Saskatoon Blades for the final time this season and fell 6-5. Overall the Tabbies are 29-14-1-1 and they are led by their Captain James Hamblin with 71 points (28G, 43A) and veteran forward Brett Kemp with 57 points (22G, 35A). After tonight, the Tigers’ next game will Tuesday, January 28th in Medicine Hat when they host the Swift Current Broncos.

The Tigers will pay a visit to the Art Hauser Centre tonight to play the Raiders. Tonight’s game will be the third meeting between these two hockey clubs this season. Medicine Hat has won both previous contests, 4-2 in November and 8-4 in December. Brett Kemp and Cole Sillinger lead the way for the Tabbies against the Raiders this season with 7 points each. Kemp has four goals and three assists while Silliner has two goals and five assists. Over the past five years, Medicine Hat is 7-6-1-0 against Prince Albert and 4-3-0-0 when playing at the Art Hauser Centre. After tonight, these two clubs will meet a final time in Medicine Hat on February 5th, 2020.

Tonight’s game at the Art Hauser Centre will the Prince Albert Raiders’ second game of a four game homstand. They kicked off their homestand by defeating the Edmonton Oil Kings 3-2 last night. Goaltender Max Paddock stopped 30 of 32 shots faced in the contest. The Raiders are now 24-14-5-3 and they are led by Washington Capitals prospect Aliaksei Protas with 57 points (22G, 57A) and 2020 NHL Draft Eligible Ozzy Wiesblatt with 49 points (19G, 30A). After tonight’s game against Medicine Hat, the Raiders will host the Victoria Royals Wednesday and the Lethbridge Hurricanes Friday.

Captain James Hamblin extending his point streak to 16 games last night with a goal and an assist, bringing his total to 28 (11G, 17A). The 20-year-old Edmonton product is the Tigers’ leading scorer with 71 points (28G, 43A). Hamblin is a diminutive offensive dynamo who leads his team with hard work and dedication. He is a two-way forward who can be relied on in any situation for the Tabbies. Look for Hamblin to create scoring opportunities in tonight’s tilt.