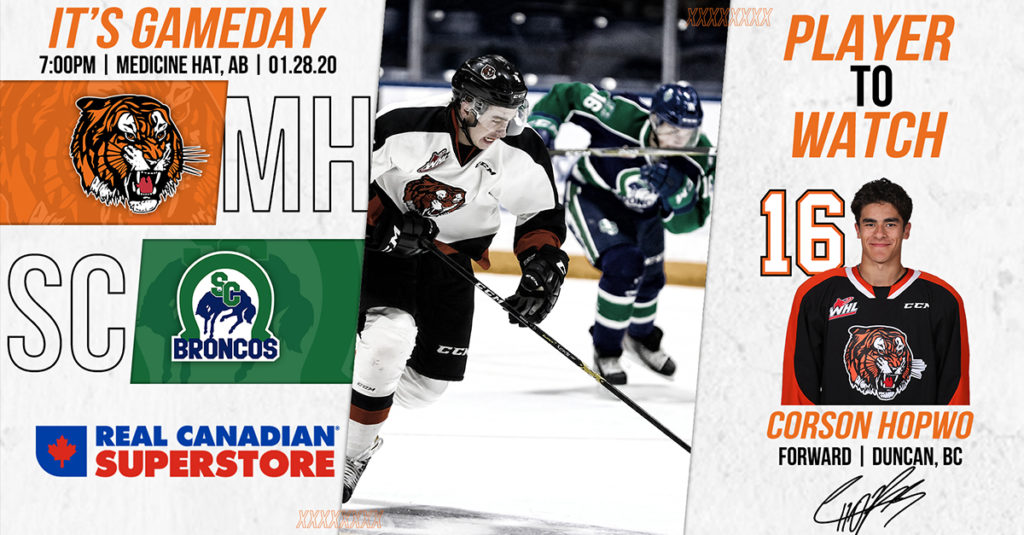 The Medicine Hat Tigers travelled to Saskatchewan for a two game road trip and they ended up splitting the weekend. Friday the Tigers fell 6-5 to the Saskatoon Blades before defeating the Prince Albert Raiders 4-3 in a shootout on Saturday. Brett Kemp scored the game winning goal in the shootout. The Tabbies are now 30-14-1-1 and they are led by their Captain James Hamblin with 72 points (28G, 44A). After tonight’s game against the Broncos, the Tigers will travel to Swift Current Friday for a rematch before returning home Saturday to host the Brandon Wheat Kings.

Tonight’s game between the Tigers and the Broncos will be the first game of a home and home series between these two clubs this week. After facing off tonight in Medicine Hat, they will meet Friday in Swift Current. The Tigers are 2-0-0-1 against the Broncos this season and Captain James Hamblin leads the Tigers in the series against the Broncos with 6 points (2G, 4A). Over the past five years, Medicine Hat is 10-4-0-1 against Swift Current and 6-1-0-0 when playing at home. After this week’s series, these two teams will meet three more times all in March.

The Swift Current Broncos played a home and home series with the Moose Jaw Warriors this past weekend with the visiting team winning both contests. Friday, the Broncos fell 5-2 at home before defeating the Warriors 6-3 in Moose Jaw. Veteran forward Jaxan Kaluski had a hat trick in Saturday’s game while veteran forward D-Jay Jerome had a four point (1G, 3A) weekend. The Broncos are 10-31-1-3 this season and they are led by Jerome with 37 points (16G, 21A). After tonight’s game in Medicine Hat, the Broncos will return home for a three game homestand starting Friday when they host the Tigers for the second game of this home and home series.

Corson Hopwo is a hardworking, skilled forward in his second season with the Orange and Black. The 18-year-old Duncan, BC product brings energy, speed, high hockey IQ and good footwork into every game. Hopwo has already set new career highs in all offensive categories with 32 points (11G, 21A). He also has eight points (2G, 6A) in the Tigers’ last four games. Hopwo along with linemates Captain James Hamblin and Lukas Svejkovsky have a combined total of 42 points (19G, 23A) in the Tigers’ 11 games played in January. Look for Hopwo to make an impact in tonight’s game.

Captain James Hamblin has been the Tigers top scorer all season and he is currently tied as the top scorer in the league with 72 points. Hamblin is also tied in fourth in the league for goals with 28 and he is third in the league for assists with 44. The 20-year-old Edmonton product has already matched in career high in assists of 44 that he set last season. Hamblin is a skilled, speedy two way forward who can be relied on in any situation. The Tigers’ second year Captain leads his team by example with his hard work ethic and dedication.