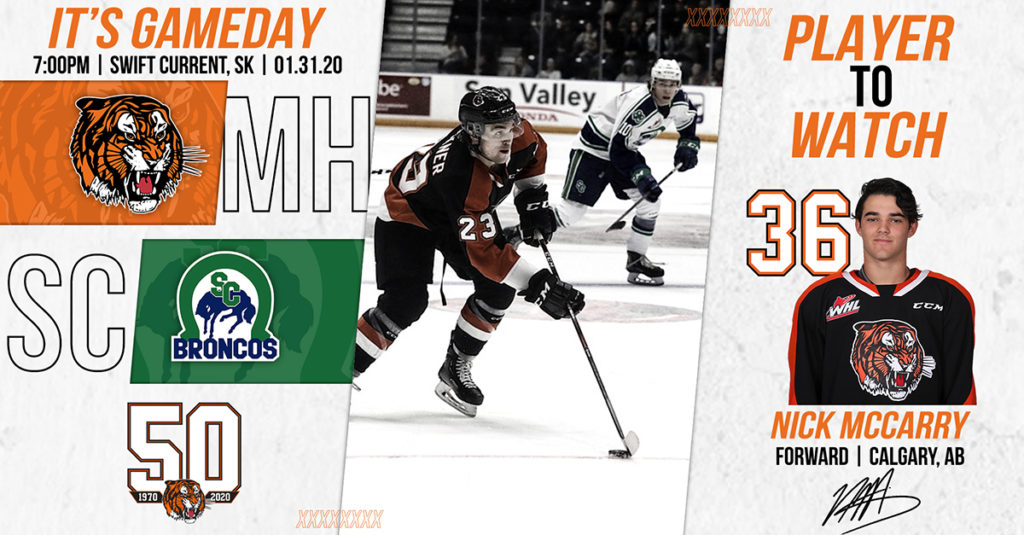 The Medicine Hat Tigers won the first game of this week’s home and home series with the Swift Current Broncos 7-0 on Tuesday night at the Canalta Centre. Linemates Captain James Hamblin, Corson Hopwo and Lukas Svejkovsky led the way for the Tigers in Tuesday’s contest collecting a combined total of 11 points (4G, 7A). Rookie goaltender Garin Bjorklund earned his first career WHL shutout that night. The Tigers are 31-14-1-1 this season and they are led by Captain Hamblin with 76 points (29G, 47A). After tonight’s game, the Tabbies will return home to host the Brandon Wheat Kings Saturday night.

Tonight’s game in Swift Current will be the second game of a home and home series played between the Tigers and the Broncos this week. The Tigers took the first game at home on Tuesday 7-0. In this year’s head to head battle between these two clubs, Medicine Hat is 3-0-0-1 and they are led by their Captain James Hamblin who has 10 points (3G, 7A) in the four games played. Over the past five years, the Tabbies are 11-4-0-1 against the Broncos and 4-3-0-1 when playing in Swift Current. These two Central Division Rivals will meet three more times this season, all in March.

The Swift Current Broncos will be looking to rebound tonight against the Medicine Hat Tigers after being shut out by the Tabbies earlier this week. The Broncos are 10-31-1-3 and they are led by veteran forward D-Jay Jerome with 37 points (16G, 21A). Tonight’s game against Medicine Hat will be the first game of a three game homestand for Swift Current. Saturday the Broncos will host the Prince Albert Raiders and next Friday they will host the Regina Pats for the first game of a home and home series against Regina.

Nick McCarry is a speedy, tenacious forward in his second season with the Orange and Black. The 18-year-old Calgary native has three goals in the Tigers’ last three games and he has already achieved new career bests in all offensive categories this season. McCarry is a smart, hard working player. Look for him to drive to the net and create scoring opportunities in tonight’s battle with the Broncos.

Captain James Hamblin is leading the league in scoring with  76 points, he is fourth in the league for goals with 29 and tied for first in the league for assists with 47. Hamblin had a four point night (1G, 3A) on Tuesday against the Broncos and has now set a new career best in assists. In his career as a Tiger, the 20-year-old Edmonton product has 20 points (8G, 12A) in 18 games played against the Broncos. Hamblin is a speedy, skilled, two-way forward who leads his team by example.