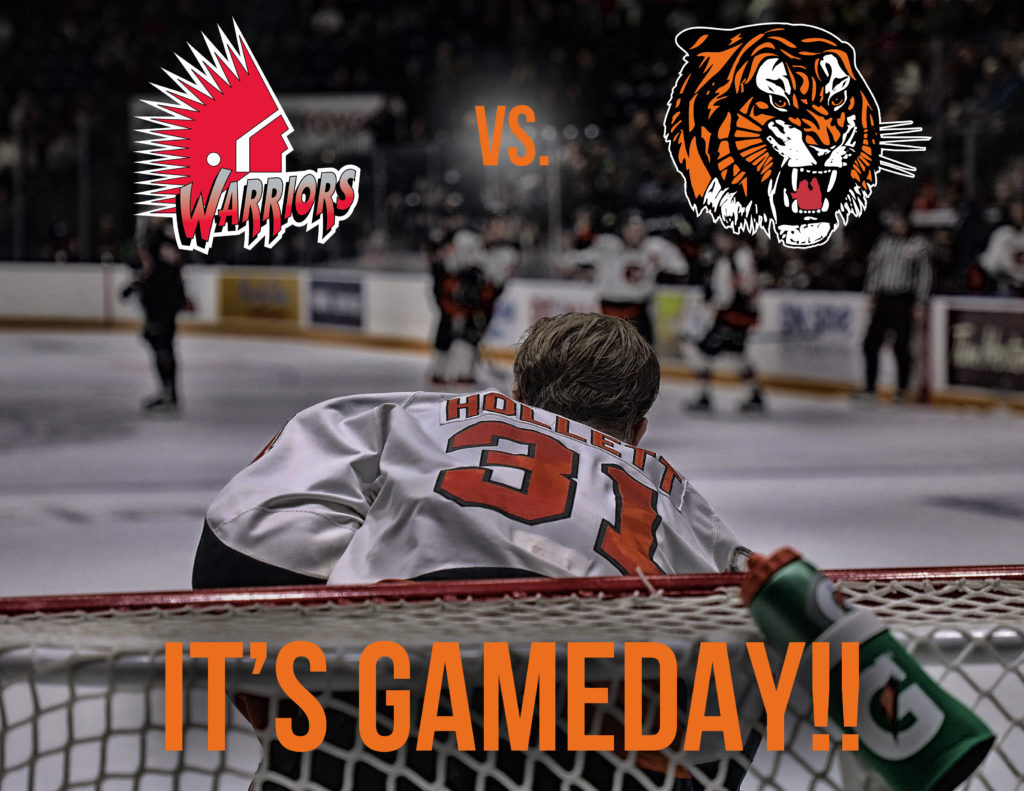 The Medicine Hat Tigers won their fourth straight game in a thrilling 5-3 victory over the Red Deer Rebels. Elijah Brown had his first two-goal game of this season while Bryan Lockner and Cole Clayton picked up three assists each. The Tigers have now improved their record to 27-16-2-2 and currently sit in 2nd place in the Central Division. The Orange and Black are led by veteran forwards James Hamblin with 57 points (27G, 30A), Brett Kemp with 42 points (25G, 17A) and Ryan Jevne also with 42 points (21G, 21A).

Tonight marks the third time this season the Tigers and the Warriors will battle. The Warriors took the first game 4-3 in a shootout back in October while the Tabbies took the second game 6-5 in overtime Dec 5th. Ryan Jevne scored the game-winning goal 1:16 in overtime to win the game for the Tigers. Medicine Hat is 3-3-1-0 against Moose Jaw over the past five years. After tonight’s meeting, these two clubs will travel to Moose Jaw to battle for the last time this season Friday, February 1st.

The Moose Jaw Warriors close out a 7 game road trip in Medicine Hat tonight. The Warriors are 5-0-1-0 on their road trip after defeating the Edmonton Oil Kings 5-2 last night. Moose Jaw is led by veteran forward Tristin Langan with 78 points (38G, 40A) and Pittsburg Penguins’ 2018 draft pick Justin Almeida with 63 points (16G, 47A). Both players had a goal and an assist in last night’s game against the Oil Kings.

Elijah Brown has 4 points (2G, 2A) in the Tigers’ last 2 games. The 19-year-old Edmonton product is a gritty, fearless forward with an offensive upside. Brown uses his speed to create opportunity all over the ice and he isn’t afraid to mix it up. His work ethic and creativity make him a fun player for fans to watch. Look for Brown to drive to the net and create scoring lanes tonight.

Captain James Hamblin has been the Tigers’ top point producer all season with 57 points (27G, 30A), averaging 1.21 points per game. Hamblin is a hard-working two-way forward with a pass-first mentality but who also has a great scoring touch. The 19-year-old Edmonton native was drafted in the first round of the 2014 Bantam draft for the Tigers and since then he has suited up for 241 games, scoring 73 goals and picking up 99 career assists.

The Medicine Hat Skateboard Association is a group of people who share a passion for skateboarding. Not only do they love to skateboard, but they also desire to use the talents that they have been given to shine a light in some dark places of this world. They have shown that they are committed to achieving the goals they set, regardless of the sacrifice that must be made.