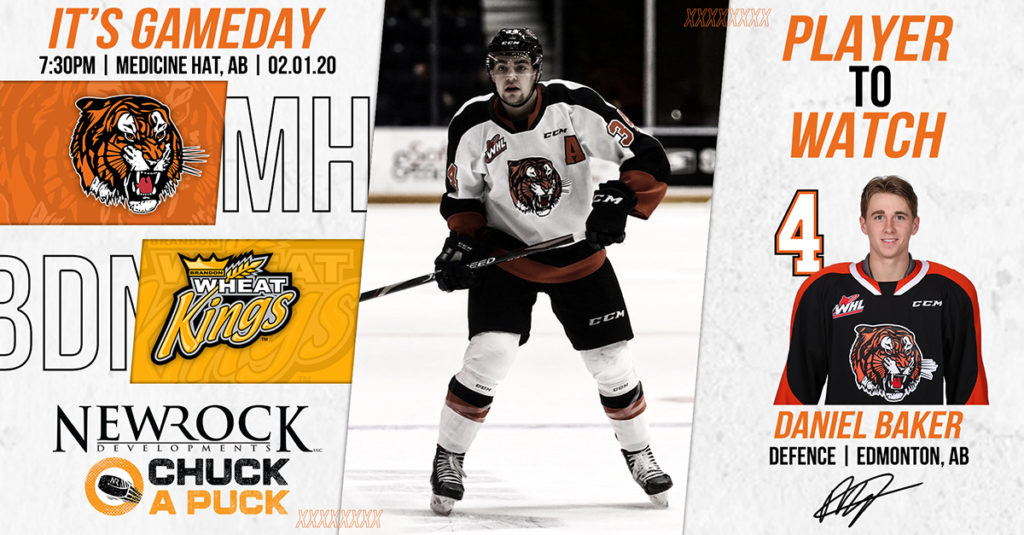 After falling behind 1-0 in the first period, the Medicine Hat Tigers scored four unanswered goals to defeat the Swift Current Broncos 4-1 last night at the Innovation Credit Union i-plex. With last night’s win, the Tabbies swept the Broncos in a home and home series this week that saw the Tigers defeat the Broncos 7-0 at home Tuesday night. Medicine Hat is 32-14-1-1 this season and they are led by their Captain James Hamblin with 77 points (30G, 47A). After tonight’s game against Brandon, the Tabbies will host the Prince Albert Raiders Wednesday before departing to Manitoba to play the Wheat Kings Friday and the Winnipeg ICE Saturday.

The Brandon Wheat Kings will play the final game of a four game road trip tonight in Medicine Hat. The Wheat Kings fell to the Edmonton Oil Kings 6-2 and the Red Deer Rebels 5-4 before bouncing back to beat the Calgary Hitmen 4-0 last night. Vegas Golden Knights drafted goaltender Jiri Patera stopped all 37 shots faced in the contest against the Hitmen. The Wheat Kings are 26-19-2-2 and they are led by Colorado Avalanche drafted Luka Burzan with 51 points (29G, 22A). After tonight, the Wheat Kings will return home to host Medicine Hat next Friday.

Daniel Baker is a smart, two-way defenceman in his second season with the Orange and Black. The 18-year-old Edmonton native is a calm, collected player who takes care of his defensive responsibilities and who is not afraid to join the rush up the ice. Baker has already set new career bests in all offensive categories this season with 34 points (12G, 22A). He is 10th in the league for defenceman scoring and he is tied in third in the league for plus minus with a +34 rating.

Captain James Hamblin has been the Tigers’ top point producer all season and he is currently first in the league in scoring with 77 points. He is tied in fourth in the league for goals with 30 and he is second in the league in assists with 47. The 20-year-old Edmonton product is a speedy, skilled two-way forward who leads his team by example. He is a fierce forechecker with great transitioning ability. Look for Hamblin to make an impact in tonight’s game.

Medicine Hat Adaptive Sport and Recreation is a local non-profit group that provides sport & rec opportunities for people with and without disabilities. Some of their sports include sledge hockey, wheelchair basketball and children’s summer camps. They are a volunteer run organization and depend on donations, fundraisers and grants to provide sports opportunities for people of all abilities.