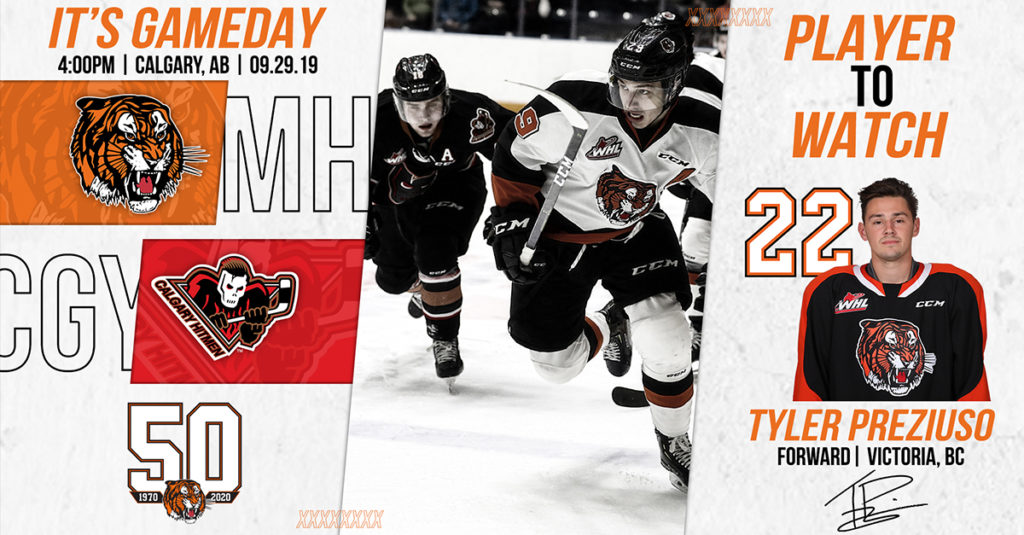 This afternoon will be the Medicine Hat Tigers’ third game in three days after playing a home and home series against the Swift Current Broncos. The Tigers travelled to Swift Current Friday night and defeated the Broncos 2-0. On Saturday they returned home to the Canalta Centre and won 10-1. Eight different Tigers scored during Saturday night’s tilt while rookie goaltender Garin Bjorklund stopped 32 of 33 shots faced.

Today’s game marks the first of six meetings between these two hockey clubs this season. The last time the Tabbies defeated the Hitmen was November 4th, 2018, in a close 5-4 contest. Captain James Hamblin was the Tigers’ top point producer against the Hitmen last year with 9 points (1G, 8A) in 6 games played. Over the past five years, Medicine Hat is 15-7-2-0 against Calgary.

The Calgary Hitmen are on a two game winning streak after defeating the Edmonton Oil Kings 4-3 in overtime Friday night and the Red Deer Rebels 5-1 on Saturday. Veteran forward Riley Stotts scored a natural hat trick Saturday night. After this afternoon’s contest, the Hitmen won’t be back in action until next Sunday against the Portland Winterhawks.

Tyler Preziuso had a banner year last season setting new career highs in all offensive categories (21G, 29A) and he will be looking to build on that this season. The 20-year-old Victoria native is a smooth skating, well rounded forward with an explosive first step. He has scored in the Tigers’ last two games. Look for Preziuso’s hard work to have an impact on this afternoon’s tilt.

Captain James Hamblin has five points (2G, 3A) in four games heading into this afternoon’s contest. Last season, the 20-year-old Edmonton native was the Tigers’ top point producer with 77 points (33G, 44A) in 67 games. Hamblin is a speedy, skilled two-way forward who leads the Tigers with tenacity and hard work.