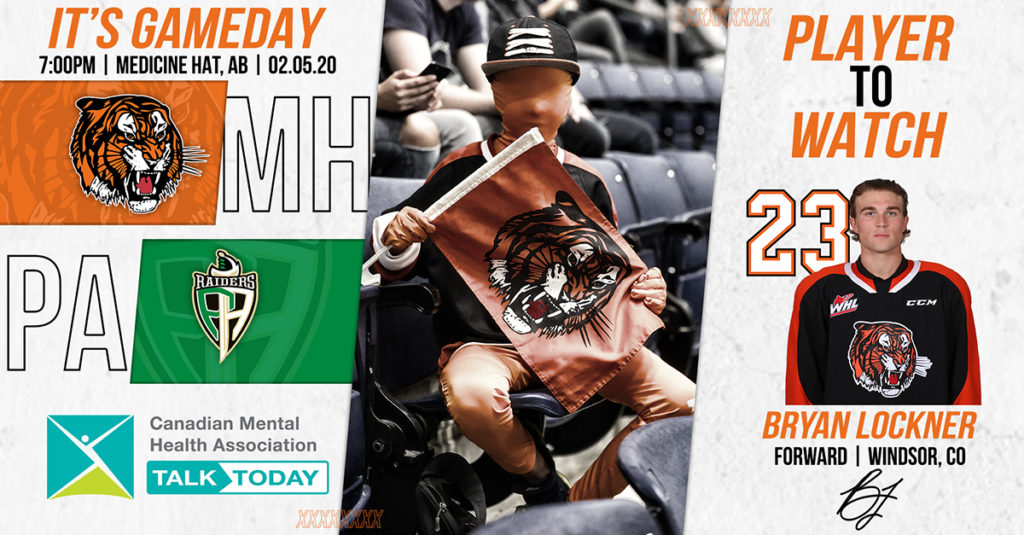 Despite a late push in the third period, the Medicine Hat Tigers fell 4-3 to the Brandon Wheat Kings Saturday night. Trailing 4-1 with less than three minutes remaining, Daniel Baker and Brett Kemp each scored to bring the Tabbies within one. The Orange and Black are 32-14-1-1 this season and they are led by their Captain James Hamblin with 77 points (30G, 47A). After tonight’s game at the Canalta Centre, the Tigers will travel to Manitoba for a two game road trip. Friday they have a rematch against the Wheat Kings and Saturday they will faceoff with the Winnipeg ICE.

For the final time this regular season, the Tigers will faceoff with the Raiders. Medicine Hat has won all three previous meetings including a close 4-3 shootout victory in Prince Albert Jan 25, 2020. Brett Kemp and Cole Sillinger are leading the way for the Tabbies against the Raiders with seven points each. Kemp has four goals and three assists while Sillinger has two goals and five assists. Over the past five years, Medicine Hat is 8-6-1-0 against Prince Albert and 3-3-1-0 when playing at home.

The Prince Albert Raiders opened their four game road trip by defeating the Swift Current Broncos 4-1 on Saturday night. Zack Hayes (1G, 1A) and Kaiden Guhle (2A) each had two point nights in the victory. After tonight’s battle with the Tigers, the Raiders will pay visits to Calgary Friday night and Lethbridge Saturday night before returning home for a three game homestand. Prince Albert is 27-14-5-4 and they are led by Washington Capitals prospect Aliaksei Protas with 59 points (22G, 37A).

Alternate Captain Bryan Lockner is a powerful workhorse in his third season with the Orange and Black. The 19-year-old Windsor, CO product has shifted from playing wing to playing centre this season because he is a smart, two-way forward. Since moving into his new role, Lockner has been heavily relied upon to win big faceoffs for the Tigers. He is a vocal leader and he is great on the penalty kill. Offensively, Lockner has a lethal shot and a powerful stride that helps him transition. Look for Lockner to make an impact at both ends of the ice in tonight’s contest.

Captain James Hamblin has been leading the charge for the Tigers all season long and he has 77 points (30G, 47A) so far this season. The 20-year-old Edmonton native is a solid 200 foot player who protects his zone and takes care of his responsibilities. Hamblin is smart, speedy centre with great play making skills. He has already set a new career best in assists this season with 47. Look for the Captain to lead his team by example in tonight’s tilt.