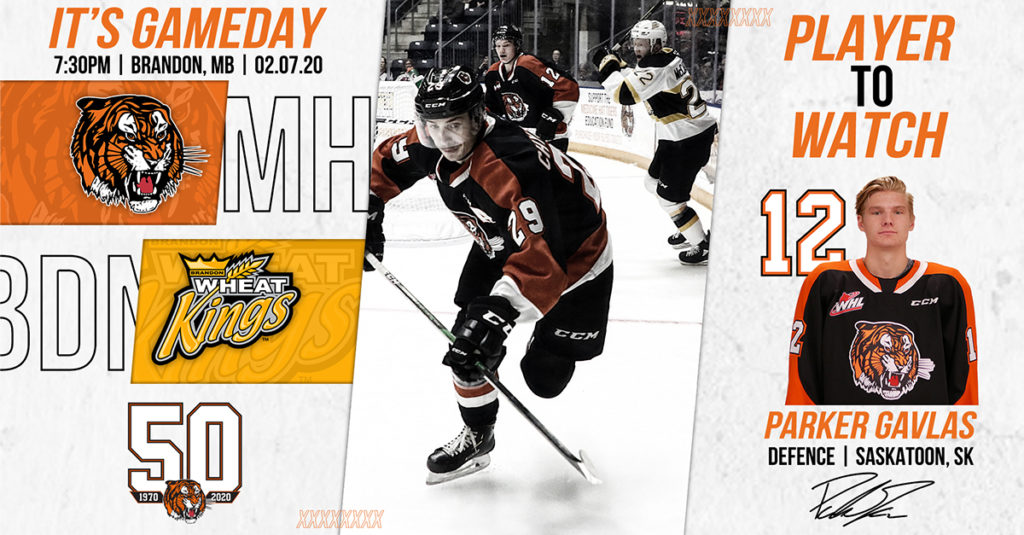 The Medicine Hat Tigers lost a heartbreaker to the Prince Albert Raiders on Wednesday night falling 4-3 in overtime. The Tigers were seven seconds away from winning the game in regulation when the Raiders scored to send it to extra time. Eight seconds into overtime, the Raiders scored the game winning goal. Nick McCarry had a two goal performance in the losing contest and earned the second star of the night. The Tabbies are 32-15-2-1 and they are led by their Captain James Hamblin with 77 points (30G, 47A). After tonight’s game in Brandon, the Tigers will travel to Winnipeg to take on the ICE before returning home to host the Regina Pats on Tuesday.

For the final time, this season the Tigers will faceoff with the Wheat Kings. Brandon has won all three previous meetings this season including last Saturday’s 4-3 contest in Medicine Hat. With just over four minutes left to play in the game, the Wheat Kings scored on an empty net to make it 4-1. The Tabbies were tenacious and rallied to score twice to bring themselves within one but they were unable to find the game tying goal. Over the past five years, Medicine Hat is 6-6-3-0 against Brandon and 2-4-1-0 when playing at Westoba Place.

The Brandon Wheat Kings returned home from a four game Central Division road trip with a 2-2-0-0 record. The Wheat Kings opened their trip by falling 6-2 to Edmonton and 5-4 to Red Deer before bouncing back to shut out Calgary 4-0 and finishing it off by defeating Medicine Hat 4-3. Brandon’s top scorer Luka Burzan collected 6 points (4G, 2A) on the road trip. Overall this season, Burzan has 53 points (30G, 23A). The Wheat Kings are 27-19-2-2 so far this season and they are currently on a two game winning streak.

Overage defenceman Parker Gavlas is in his first season with the Orange and Black. The 20-year-old Saskatoon product is a physical, puck moving defenceman. In Gavlas’ last five games played he has seven points (1G, 6A) and he has already set new career bests in all offensive categories this season with 18 points (2G, 16A). He is a great skater who is relied upon to play against the other teams’ top players. Look for Gavlas to make an impact at both ends of the ice in tonight’s contest.

Captain James Hamblin is the Tigers’ top goal scorer with 77 points (30G, 47A) and he is second in league scoring. For the second time in his WHL career, the 20-year-old Edmonton product has scored 30 goals and for the third time in his career, he has 40 or more assists. The Tigers’ 2014 first round bantam pick has already tied his career best in points with 77 that he set last season. Hamblin is a solid 200 foot player who protects his zone and takes care of his responsibilities. He is a smart, speedy centre with great playmaking skills and who is not afraid to light the lamp himself. Look for the Captain to lead his team by example in tonight’s battle with Brandon.