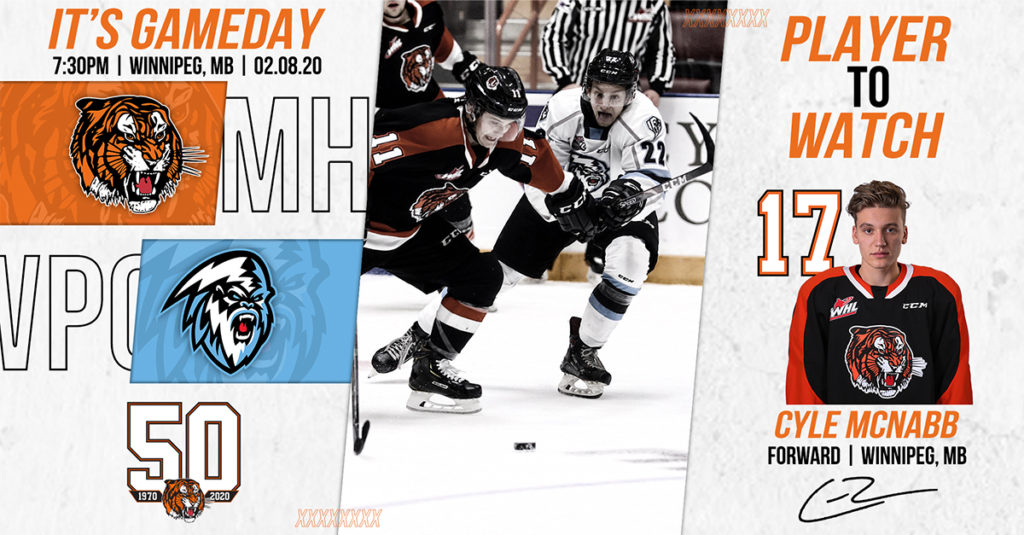 The Medicine Hat Tigers came from behind to defeat the Brandon Wheat Kings 3-2 in overtime last night. Trailing 2-0 late in the game, Nick McCarry and James Hamblin each scored to send the game to extra time. Eighteen seconds into overtime, Brett Kemp scored the game winning goal. The Orange and Black are 33-15-2-1 and they are led by their Captain Hamblin with 78 points (31G, 47A). The Tigers will close out their two game Manitoba road trip tonight in Winnipeg before returning home to host the Regina Pats on Tuesday night.

The Tigers take on the ICE tonight for their third meeting of this season. Medicine Hat won both previous contests, 4-1 in January and 5-2 in October. Rookie goaltender Garin Bjorklund suited up for the Tabbies in both previous matches and overall he has posted a 1.50 GAA and a 0.955 SAV% against the ICE. Over the past five years, the Tigers are 20-2-0-0 against the ICE and 10-1-0-0 when playing on the road. After tonight, these two hockey clubs will meet a final time in Medicine Hat on February 17th for a Family Day afternoon tilt.

The Winnipeg ICE defeated the Moose Jaw Warriors 5-1 at the Wayne Fleming Arena on Wednesday night. Jackson Leppard scored a natural hat trick in the contest while Isaac Johnson had a four point night (1G, 3A). The ICE are 30-19-1-0 and they are led by Johnson with 60 points (20G, 40A). After tonight’s game against the Tabbies, the ICE will depart on a four game road trip with stops in Swift Current, Lethbridge for two games and finishing it off in Medicine Hat.

Cyle McNabb is a strong, two way forward in his first season with the Orange and Black. The 19-year-old Winnipeg product was acquired by the Tabbies in November from the Saskatoon Blades and he has 12 points (4G, 8A) in 26 games played with the Tigers. In Medicine Hat’s last seven games, McNabb and linemates Nick McCarry and Bryan Lockner have been creating havoc for the other team’s defence combining for a total of 14 points (8G, 6A). Look for their line to make an impact in tonight’s tilt.

Captain James Hamblin has been the Tigers’ leading scorer all season with 78 points (31G, 47A). The 20-year-old Edmonton product is second in league scoring, tied in for fourth in the league for goals with 31 and he is second in the league for assists with 47. He has already set new career bests in assists and points this season and he is close to matching his career high of 33 goals that he set last year. Hamblin is a solid 200 foot player who protects his zone and takes care of his responsibilities. He is a smart, speedy centre with great playmaking skills and who is not afraid to light the lamp himself. Look for the Captain to lead his team by example in the game tonight.