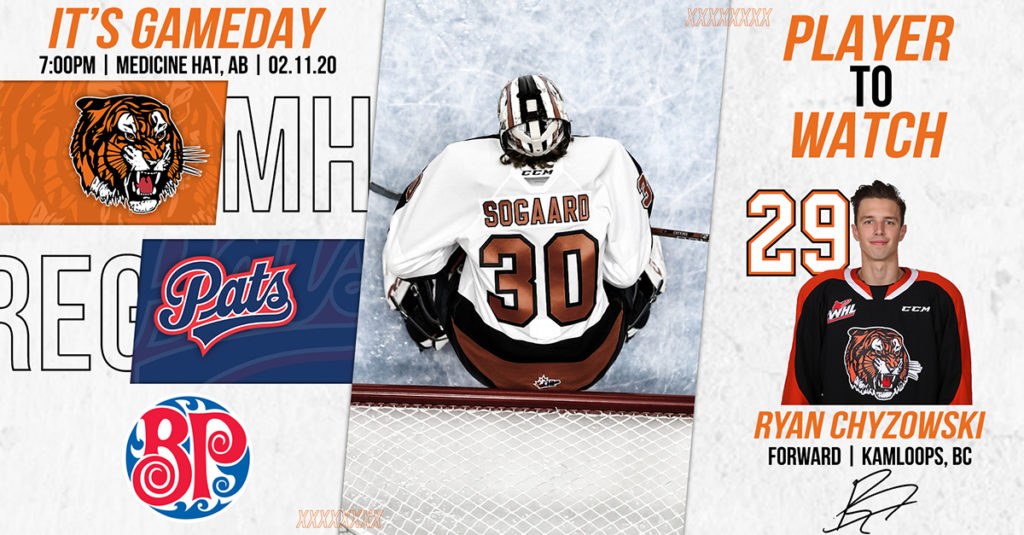 The Medicine Hat Tigers return home from a two game Manitoba road trip to host the Regina Pats tonight at the Canalta Centre. The Tigers came from behind to defeat the Brandon Wheat Kings 3-2 in overtime on Friday night before falling 4-1 to the Winnipeg ICE Saturday. After tonight’s battle with the Pats, the Tabbies will travel to Edmonton Saturday to play the Oil Kings before returning home to host the Winnipeg ICE on Monday for a Family Day afternoon game. The Orange and Black are 33-16-2-1 and they are led by their Captain James Hamblin with 79 points (32G, 47A).

Tonight the Tigers will take on the Pats for the second time this season. The last time these two hockey clubs met was October 4th, 2019, in Regina. The Tabbies won 6-2 and linemates Cole Sillinger (2G, 1A) and Ryan Chyzowski (1G, 2A) each had 3 point nights. Over the past five years, Medicine Hat is 8-5-0-0 against Regina and 3-3-0-0 when playing at the Canalta Centre. The next time these two clubs will meet is February 28th and 29th for a home and home series that kicks off in Regina.

The Regina Pats kick off a three game Central Division road trip tonight in Medicine Hat when they face off with the Tigers. After tonight, they will pay Calgary on Wednesday and Edmonton Friday before returning home for a Family Day afternoon contest against the Brandon Wheat Kings on Monday. Last weekend, the Pats played swept the Broncos in a home and home series. On Friday they won 4-2 in Swift Current and Saturday they won 6-2 at home. Eleven Pats collected a point or more in the series and leading the way was Robbie Holmes with 5 points (1G, 4A). Regina is currently on a five game winning streak improving their record to 18-26-3-2 and they are led by their Captain Austin Pratt with 44 points (16G, 28A).

Ryan Chyzowski is a skilled forward with a nose for the puck who is in his fourth season with the Orange and Black. The 19-year-old Kamloops product has good awareness and positioning in all three zones. He is reliable, competes hard and he has a lethal shot. Chyzowski has 23 goals and 29 assists for 52 points so far this season which means he has scored 20 + goals and collected 50 + points for the third year in a row. In his career as a Tiger, Chyzowski has collected 10 points (5G, 5A) in 12 games played against the Pats. Look for Chyzowski to make an impact in tonight’s tilt.

Captain James Hamblin is a solid 200 foot player who protects his zone and takes care of his responsibilities. He is a smart, speedy centre with great playmaking skills and who is not afraid to light the lamp himself. The 20-year-old Edmonton native has been the Tigers’ top point producer all season and he is currently second in league scoring with 79 points. He is also tied in third for most goals with 32 and tied in third for most assists with 47. Look for the Captain to lead his team by example in tonight’s game.

Boston Pizza is a Canadian casual dining restaurant with more than 380 locations. It was founded in 1964 in Edmonton, AB. There are currently two Boston Pizza locations in Medicine Hat, Box Springs and Strachan Road.

The YMCA of Medicine Hat has been providing services to Medicine Hat and Area for over 60 years by helping children and families thrive, fostering belonging and connection as well as promoting a healthy community.