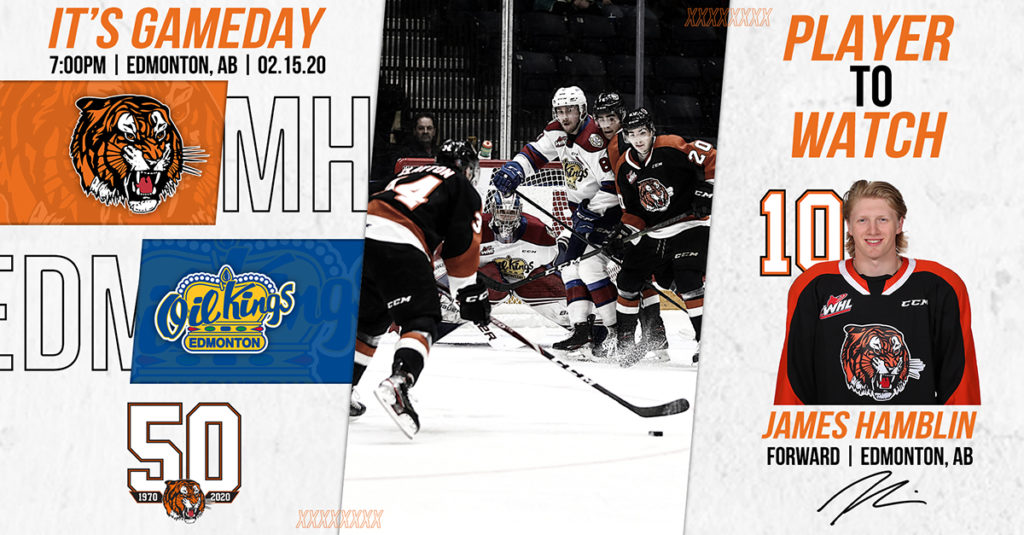 The Medicine Hat Tigers shut out the Regina Pats 7-0 at the Canalta Centre on Tuesday night. Veteran forward Ryan Chyzowski had a three point night (1G, 2A) in the contest while Danish Imports Jonathan Brinkman and Mads Søgaard each made an impact. Brinkman had his first two goal game of his WHL career and Søgaard earned his third shut out of the season stopping all 24 shots faced. The Orange and Black are 34-16-2-1 so far this season and they are led by their Captain James Hamblin with 81 points (33G, 48A). After tonight’s game in Edmonton, the Tigers will return home to host the Winnipeg ICE on Monday for an afternoon tilt.

The Tigers are 1-3-0-0 against the Oil Kings so far this season. Their lone victory came November 16th, 2019, at home when the Tabbies won 5-1. Captain James Hamblin had a four point night (2G, 2A), sophomore forward Corson Hopwo picked up three points (2G, 1A) and goaltender Mads Søgaard stopped 31 of 32 shots faced in the contest. Over the past five years, the Orange and Black are 14-6-2-0 against the Oil Kings and 6-5-0-0 when playing at Rogers Place. The final meeting between these two hockey clubs this season will be March 7th in Medicine Hat.

The Edmonton Oil Kings’ four game winning streak was snapped last night when they fell 5-3 to the Regina Pats. The Oil Kings will be looking to rebound tonight when they host the Medicine Hat Tigers for the fifth game of a six game homestand. Edmonton is 35-9-6-3 and they are led by veteran forward Riley Sawchuk with 65 points (23G, 42A). After tonight, the Oil Kings will host the Lethbridge Hurricanes Monday for a Family Day afternoon game.

Captain James Hamblin has been an integral part of the Tigers since he was drafted in the first round of the 2014 Bantam Draft. In his career as a Tiger, the 20-year-old Edmonton product has suited up for 314 games, scored 112 goals and collected 161 assists. “He’s a Tiger through and through, he leads by example and he plays a complete game, goal line to goal line. Well respected by his teammates, leaned upon by coaches, he’s a player that is counted on. His work ethic and attitude are what sets him apart,” said Assistant Coach Ryan Smith.