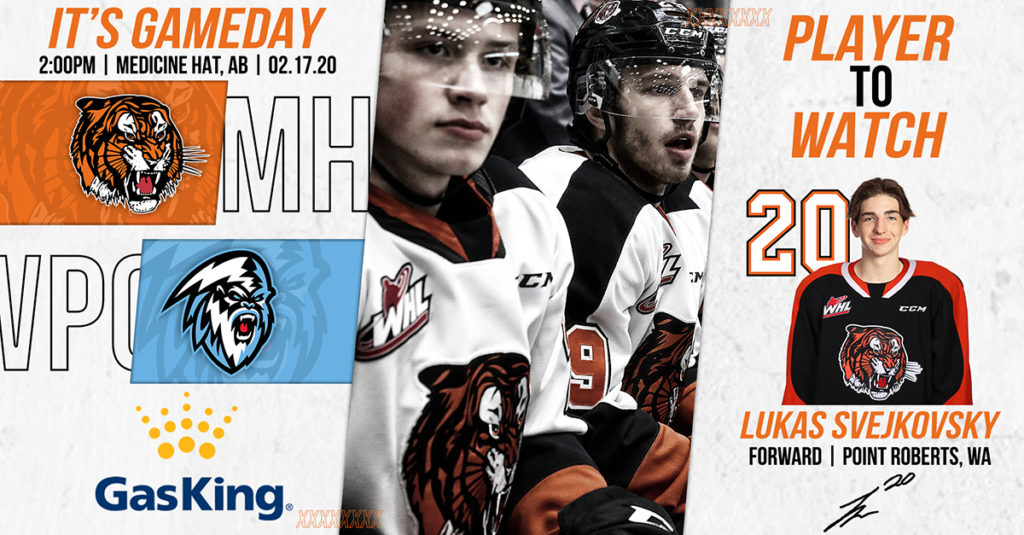 The Medicine Hat Tigers fell 5-2 to the Edmonton Oil Kings on Saturday night at Rogers Place and they will be looking to bounce back today when they host the Winnipeg ICE. The Tigers are 34-17-2-1 and they are led by their Captain James Hamblin with 82 points (33G, 49A). Today’s game against the ICE is the first game of a three game homestand for the Tabbies. They will host the Tri-City Americans Friday and the Spokane Chiefs on Saturday.

The Winnipeg ICE have been on a four game Central Division road trip that ends today in Medicine Hat. The ICE are 2-1-0-0 on their road trip so far. They defeated the Swift Current Broncos 8-3, then split a pair of games against the Lethbridge Hurricanes, losing 5-4 on Friday and bouncing back to win 5-2 Saturday. The ICE are 33-20-1-0 and they are led by veteran forward Isaac Johnson with 63 points (22G, 41A). After today’s game, Winnipeg will return home to host the Edmonton Oil Kings for the first game of a home and home series.

Lukas Svejkovsky is in his first year of NHL Draft Eligibility and he joined the Tigers on a trade in December. Since suiting up for the Orange and Black, the 18-year-old Point Roberts, WA product quickly created chemistry with his linemates Captain James Hamblin and Corson Hopwo. He has 20 points (10G, 10A) in 25 games played. Svejkovsky has good puck skills, great vision and a high hockey IQ which allows him to get better every game. Look for Svejkovsky to make an impact in this afternoon’s tilt.

Captain James Hamblin is a solid 200 foot player who protects his zone and takes care of his responsibilities. He is a smart, speedy centre with great playmaking skills and who is not afraid to light the lamp himself. The 20-year-old Edmonton native has been the Tigers’ top point producer all season and he is currently second in league scoring with 82 points. He is also tied in third for most goals with 33 and he is in fourth for most assists (49). Look for the Captain to lead his team by example in tonight’s game.

Gas King started selling fuel in Lethbridge in 1985 and they were one of the few independent fuel retailers in the area. They purchase fuel produced in the Edmonton area and they have since expanded to Medicine Hat.

Medicine Hat Women’s Shelter Society supports individuals impacted by family violence with safe shelter, education, advocacy and access to community resources. As part of Teen Dating Violence Awareness Month in February, the Women’s Shelter Society is encouraging people to start the conversation with youth about what healthy relationships look like. Stop by their booth for resources and create free buttons that promote healthy relationships as part of the MHWSS partnership with the Medicine Hat Public Library.