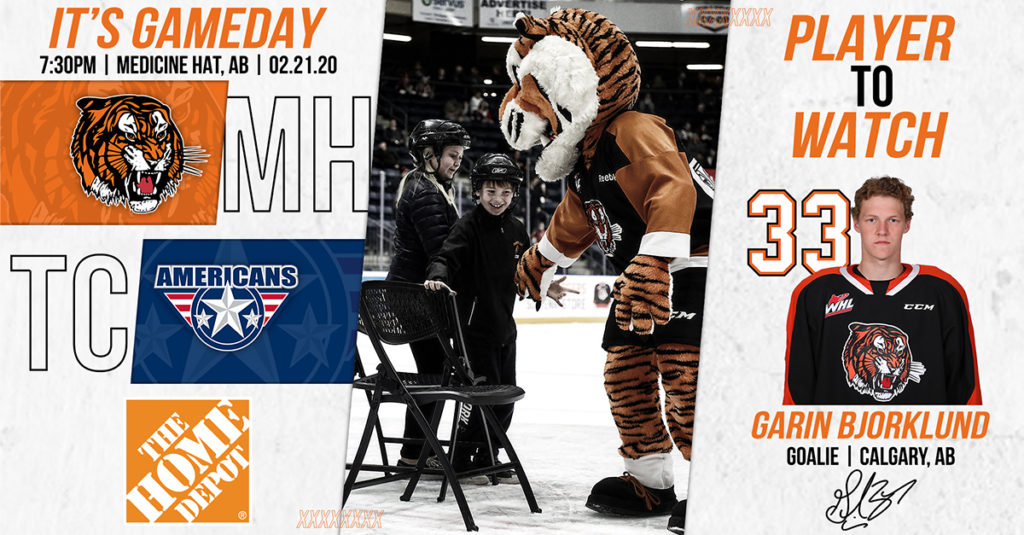 The Medicine Hat Tigers will be looking to rebound tonight when they host the Tri-City Americans. The Tabbies fell 4-2 to the Winnipeg ICE during their Family Day matinee game. Veteran forward Ryan Chyzowski scored both goals for the Tabbies in the losing contest and earned second star of the afternoon. The Orange and Black are 34-18-2-1 and they are led by their Captain James Hamblin with 82 points (33G, 49A). After tonight’s battle with the Americans, the Tigers will host the Spokane Chiefs on Saturday night.

For the first time in two years, the Tigers will host the Americans at the Canalta Centre for the annual meeting between these two hockey clubs. Last season the Orange and Black travelled to Kennewick, Washington, and defeated Tri-City 2-0. Elijah Brown and Hayden Ostir were the goal scorers for the Tigers while Jordan Hollett shut the door on the Americans saving all 26 shots faced. Over the past five years, the Tabbies are 2-1-0-0 against the Americans and 0-1-0-0 when playing in Medicine Hat.

The Tri-City Americans kicked off their three game Central Division road trip on a high note by turning aside the Swift Current Broncos 5-1 on Wednesday night. Veteran forward Sasha Mutala had a three point night (1G, 2A) while rookie goaltender Mason Dunsford stopped 41 of 42 shots. After tonight’s tilt in Medicine Hat, the Americans will finish their road trip in Red Deer against the Rebels on Saturday night. Tri-City is 17-32-4-1 and they are led by Mutala with 62 points (24G, 38A).

Garin Bjorklund is a very athletic goaltender that challenges each shot and competes hard every night. The 17-year-old Calgary native was drafted by the Tigers in the first round of the 2017 Bantam Draft and he is 17-5-1-0 with a 2.99 GAA and a 0.897 SAV% in his rookie season with the Orange and Black. “Garin is everything we could have hoped for and more. The points he’s been able to get us when he’s been in the net have been integral to our success as a team. His competitiveness, athleticism, work ethic, and respect for the game are qualities that exemplify what being a Tiger is all about,” said Coach Matt Wong

Captain James Hamblin is a solid 200 foot player who protects his zone and takes care of his responsibilities. He is a smart, speedy centre with great playmaking skills and who is not afraid to light the lamp himself. The 20-year-old Edmonton native has been the Tigers’ top point producer all season and he is currently second in league scoring with 82 points. He is also tied in third for most goals with 33 and he is in fourth for most assists (49). Look for the Captain to lead his team by example in tonight’s game.

The Home Depot caters to do-it-yourselfers, as well as home improvement, construction and building maintenance professionals. The Home Depot Canada operates 182 stores in convenient locations across Canada including the one here in Medicine Hat.