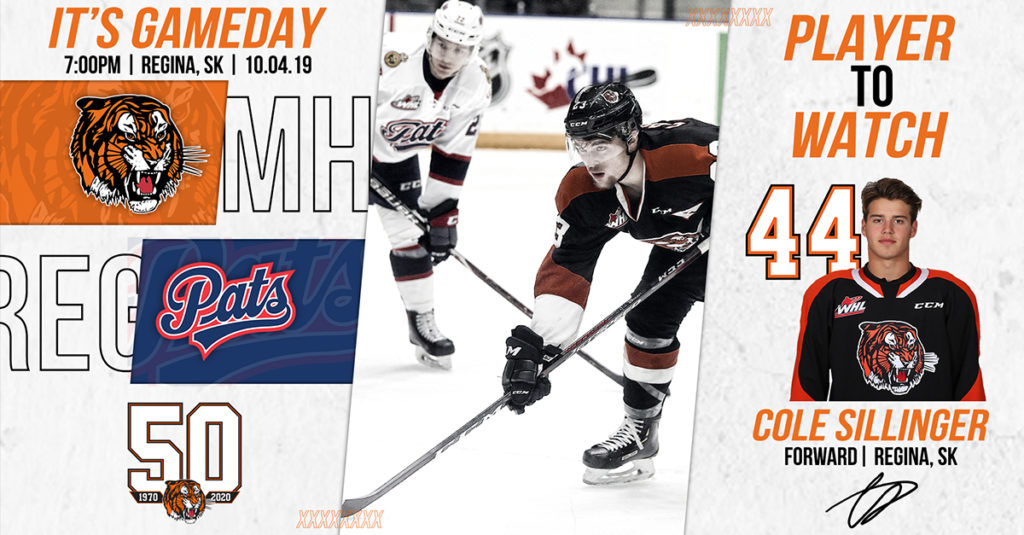 The Medicine Hat Tigers collected four out of a possible six points last weekend. The Tigers swept the Swift Current Broncos in a home and home series Friday and Saturday before falling short to the Calgary Hitmen in a 2-0 Sunday afternoon tilt. After tonight’s contest the Tigers will return to the Canalta Centre for a five game homestand starting Saturday with the Red Deer Rebels.

Tonight’s contest will be the first of four meetings between these two clubs this season. However, after tonight, they won’t meet again until February 11th, 2020. Their last battle was January 11, 2019, when the Tigers won 5-2. Medicine Hat is 7-5-0-0 against Regina over the past five years.

The Regina Pats have had a slow start to their season after losing their last three games. The Pats are led by overage forward Austin Pratt with 6 points (2G, 4A) in 4 games played. Regina is set to play three games in three days this weekend. After tonight’s tilt, they will travel to Prince Albert on Saturday and Moose Jaw on Sunday.

Rookie forward Cole Sillinger scored the team’s first goal of the 2019-20 season. The 16-year-old Regina product is a hard working, skilled power forward. Sillinger was drafted in the first round, 11th overall by the Tigers in 2018. He is ranked seventh among WHL rookies in scoring with 4 points (2G, 2A) in 5 games played. Look for Sillinger to make an impact in tonight’s game.

Captain James Hamblin is the Tigers top point producer with 5 points (2G, 3A) in 5 games played. The 20-year-old Edmonton native is a speedy, skilled two-way forward who leads the Tigers with tenacity and hard work. The 2014 first round bantam draft pick has played 266 games while scoring 81 goals and picking up 116 assists in his career with the Tigers.