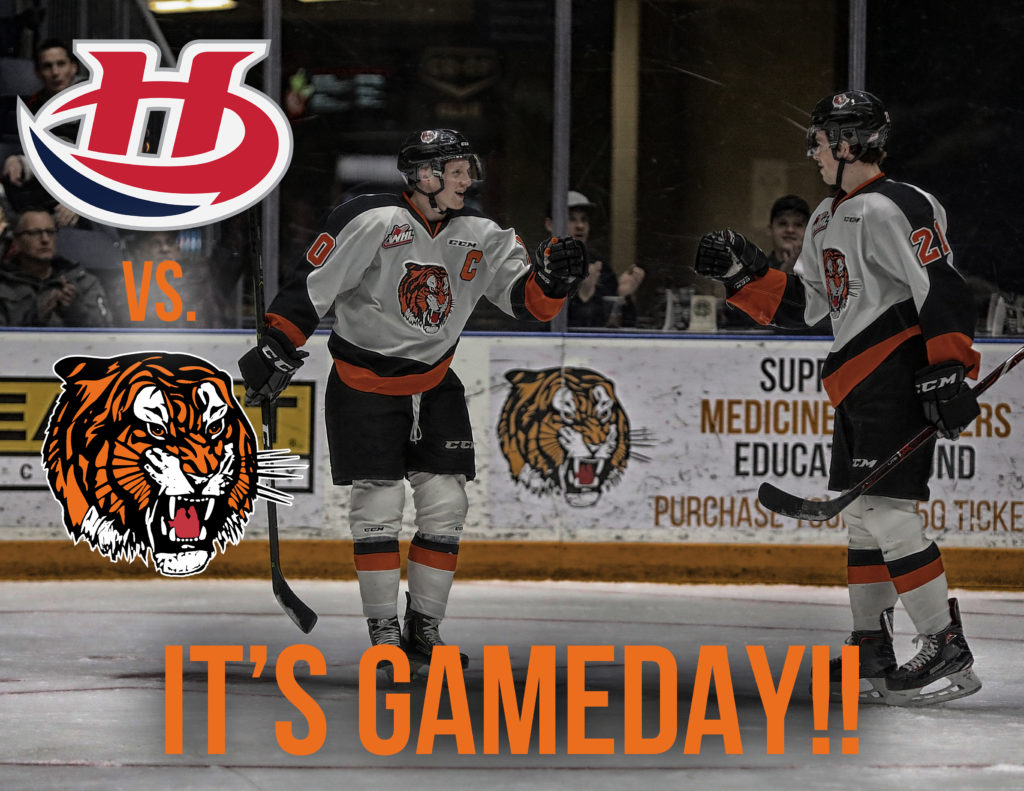 The Medicine Hat Tigers opened this home and home series against the Lethbridge Hurricanes by paying a visit to the Enmax Centre last night and they fell 6-3. Baxter Anderson played in his 100th career WHL game while rookie forward Corson Hopwo had the first two-goal game of his WHL career. Hopwo earned the third star of the night for his hard work. The Orange and Black are 31-23-3-2 and they are led by veteran forward James Hamblin with 68 points (32G, 36A).

This weekend’s home and home series between Highway Three Rivals, the Tigers and the Hurricanes is the third time this season they have played each other back to back. Last night’s game in Lethbridge was the seventh meeting of the two rivals and the Hurricanes won 6-3. Medicine Hat is 3-4-0-0 against Lethbridge this season and these two clubs will meet twice more in March after this weekend.

Last night the Lethbridge Hurricanes hosted the Tigers during their RE/MAX Presents: WHL Suits Up with Don Cherry to Promote Organ Donation night. The Hurricanes wore their special jerseys and defeated the Tigers 6-3. Lethbridge is 4-1-1-1 against Medicine Hat this season and both Jordy Bellerive and Dylan Cozens have 10 points (5G and 5A each) in 7 games played against their Central Division rivals.

Hayden Ostir returned to the Tigers’ lineup after suffering a lower-body injury in early January. Ostir did not miss a step and looked dangerous for the Tabbies while he picked up an assist on Corson Hopwo’s first goal of the night. The 19-year-old Winnipeg, MB forward now has 3 assists in the last 3 games he has played. Ostir is fearless with quick hands and great puck instincts. Look for Ostir to crash the net and create scoring opportunities in tonight’s battle.

Captain James Hamblin has been the Tigers’ top point producer all season while setting new career highs in goals (32) and points (68). Hamblin is tied with Linus Nassen for most assists on the team (36) and he is only 7 assists away from matching his career high of 43 set last season. The 19-year-old Edmonton product is a speedy, hard-working, two-way forward who leads his team by example.

The Home Depot opened its doors in Canada in 1994 and caters to do-it-yourselfers, as well as home improvement, construction and building maintenance professionals. Don’t forget to purchase a team puck, signed by Tigers players from the Home Depot table located on the concourse. The lucky fan who purchases the one ‘Mystery Puck’ signed in gold sharpie will go home with a $100 gift card to the Home Depot. All funds raised will be donated to the McMan Youth Family and Community Services Association, through the Home Depot Canada Foundation.

HALO Rescue offers the only dedicated medivac helicopter for southern Alberta and southwest Saskatchewan. The availability of the helicopter improves response time to trauma victims in remote or inaccessible areas and increases their coverage for delivering quality medical care.