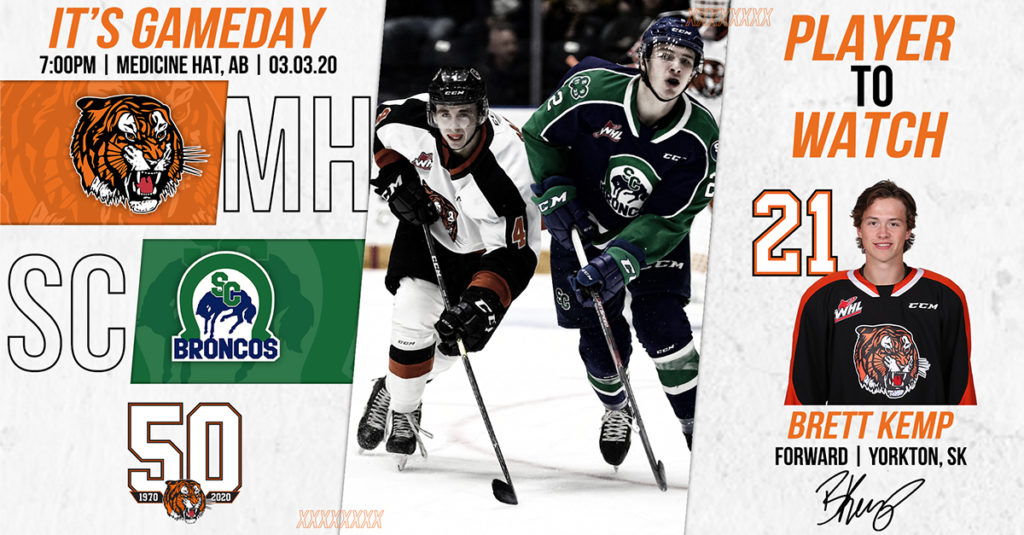 The Medicine Hat Tigers swept the Regina Pats in their season series after defeating the Pats 8-2 Friday at the Brandt Centre and 2-0 Saturday at the Canalta Centre. Veteran forward Brett Kemp scored four goals in Friday’s contest while veteran blueliner Dylan Plouffe had a four point (all assists) weekend. Tonight’s game against the Swift Current Broncos will be the second game of a five game homestand for the Tabbies. After tonight they will host the Calgary Hitmen Friday and the Edmonton Oil Kings Saturday and the Red Deer Rebels next Tuesday. The Orange and Black are 37-19-2-1 and they are led by their Captain James Hamblin with 87 points (35G, 52A).

The Tigers will host the Broncos tonight for their sixth meeting of the season. The Tabbies are 4-0-0-1 against the Broncos this year and leading the way is Captain James Hamblin with 11 points (4G, 7A) in five games played. After tonight’s game, these two Central Division Rivals will meet two more times during a home and home contest next weekend. Friday, March 13th they will meet in Swift Current before returning to Medicine Hat Saturday, March 14th. Over the past five years, the Tigers are 12-4-0-1 against the Broncos and 7-1-0-0 when playing at home.

The Swift Current Broncos were swept by the Moose Jaw Warriors in last weekend’s home and home series. Friday they fell 6-2 in Moose Jaw and Saturday they were defeated 4-2 at home. The Broncos are 10-45-1-3 this season and they are led by veteran forward D-Jay Jerome with 45 points. After tonight’s battle with the Tigers, the Broncos will travel to Edmonton Friday and Red Deer on Saturday.

Brett Kemp is a smooth skating, smart two way forward with a knack for scoring important goals. He has a deadly shot release but he is also a creative playmaker. The 19-year-old Yorkton product had his first four goal game of his WHL career February 28th vs the Regina Pats. In his WHL career, Kemp has suited up for 228 games, scored 83 goals and collected 96 assists for a total of 179 points. He is the Tigers’ second top point producer this season with 69 points (29G, 40A). Look for Kemp to make an impact on both ends of the ice in tonight’s game.

Captain James Hamblin is the Tigers top point producer this season with 87 points (35G, 52A). The 20-year-old Edmonton product is currently third in league scoring. Hamblin is a solid 200 foot player who protects his zone and takes care of his responsibilities. He is a smart, speedy centre with great playmaking skills and who is not afraid to light the lamp himself. Look for the Tigers Captain to lead his team by example in tonight’s battle.

CORE Association has been a part of the Medicine Hat community for over 65 years supporting those with developmental disabilities and delays through a variety of programs. CORE was initially established in 1954 by four students and their parents who wanted more for their children. Through years of dedicated hard work by parents, CORE employees and the community, CORE has remained a staple service provider.