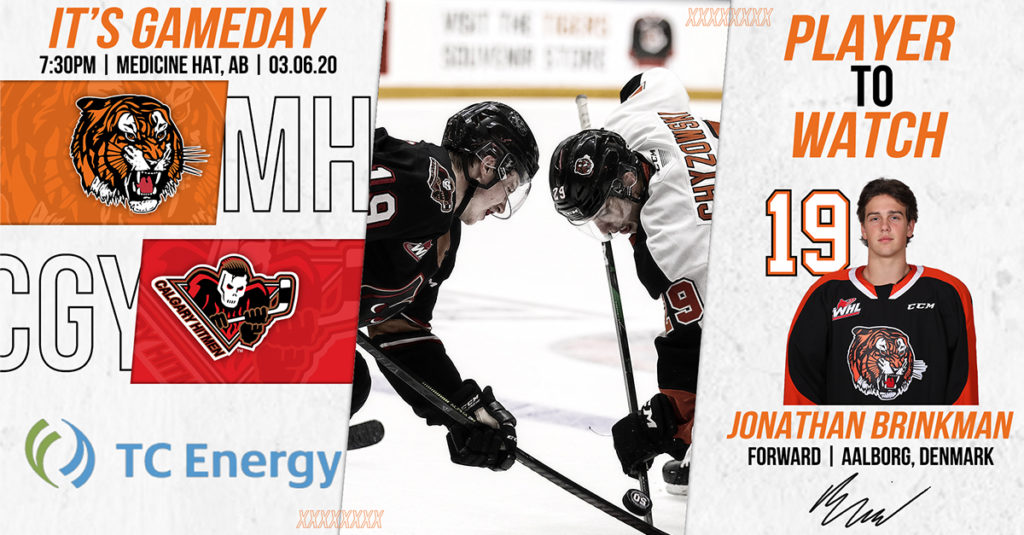 The Medicine Hat Tigers defeated the Swift Current Broncos 5-2 on Tuesday night at the Canalta Centre. Veteran forward Ryan Chyzowski scored his second career WHL hat trick in the contest while rookie goaltender Garin Bjorklund earned the win stopping 19 of 21 shots faced. Tonight the Tigers will host the Hitmen for the third game in a five game homestand. After tonight they will host the Edmonton Oil Kings Saturday and the Red Deer Rebels on Tuesday. Medicine Hat is 38-19-2-1 and they are led by their Captain James Hamblin with 88 points (36G, 52A).

The Tigers will host the Hitmen tonight at the Canalta Centre for their sixth and final meeting of the season. The Tabbies are 2-3-0-0 against the Hitmen this season with the home team winning each contest. Leading the way for the Orange and Black against the Hitmen are Captain James Hamblin with six points (3G, 3A) and veteran forward Ryan Chyzowski with five points (3G, 2A). Over the past five years, Medicine Hat is 12-9-2-0 against Calgary and 8-2-1-0 when playing at home.

The Calgary Hitmen will finish off a three game road trip tonight in Medicine Hat. The Hitmen travelled to Prince Albert Tuesday where they fell 8-3 to the Raiders before defeating the Blades 4-3 Wednesday in Saskatoon. The line of Cael Zimmerman, Carson Focht and Kyle Olson has a combined total of 10 points (4G, 6A) on the road trip so far. The Hitmen are 35-22-4-1 this season and they are led by their Captain Mark Kastelic with 67 points (37G, 30A) in 56 games played. After tonight’s battle with the Tigers, the Hitmen will return home to host the Spokane Chiefs Saturday.

Jonathan Brinkman is a highly skilled forward who can make plays at high speeds. The 18-year-old Dane was selected by the Tigers in the first round of the 2019 CHL Import Draft. In his career as a Tiger, Brinkman has 26 points (12G, 14A) in 53 games played. He has good energy and quickness along with great offensive instincts. Look for Brinkman to create offensive opportunities in tonight’s battle with the Hitmen.

Captain James Hamblin has set new career bests in all offensive categories while being the Tigers’ top scorer this season with 88 points (36G, 52A). The 20-year-old Edmonton product is currently third in league scoring. Hamblin is a solid 200 foot player who protects his zone and takes care of his responsibilities. He is a smart, speedy centre with great playmaking skills and who is not afraid to light the lamp himself. Look for the Tigers Captain to lead his team by example in tonight’s game.

For more than 65 years, TC Energy has proudly operated pipelines, storage facilities and power-generation plants that support life in Canada, the US and Mexico. Their facilities operate safely, reliably and quietly.