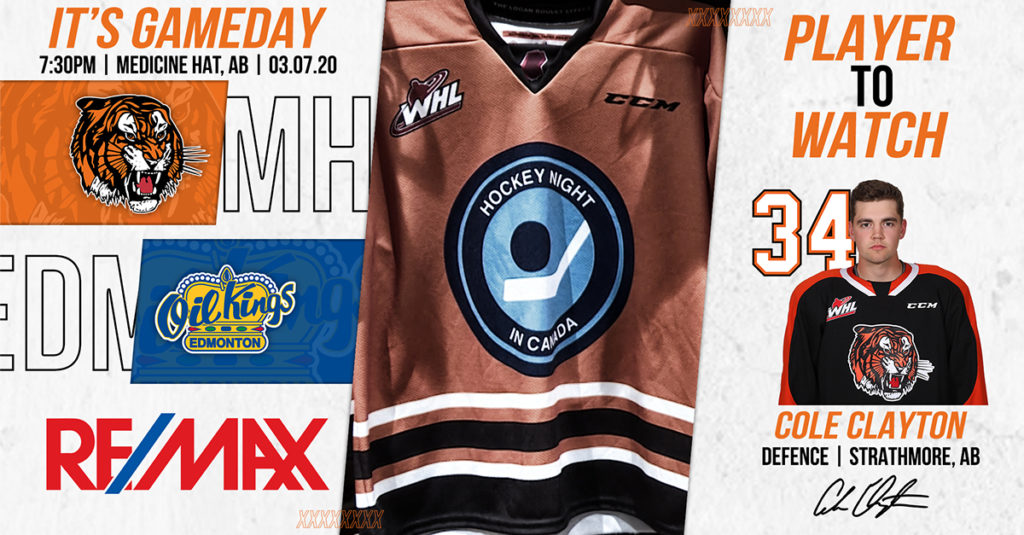 The Medicine Hat Tigers defeated the Calgary Hitmen 6-1 last night at the Canalta Centre. Rookie forward Cole Sillinger had a two goal game while Brett Kemp had a three point night (all assists). The Tigers are now 39-19-2-1 and they are tied with the Lethbridge Hurricanes for second in the division with 81 points. Captain James Hamblin leads the Tigers as top point producer with 89 points (36G, 53A). Tonight the Orange and Black host the Edmonton Oil Kings for their WHL Suits Up to Promote Organ Donation Presented by RE/MAX game. After tonight, they will host the Red Deer Rebels Tuesday for their final game of a five game homestand.

The Tigers host the Oil Kings tonight for their final meeting of the season. Medicine Hat is 1-4-0-0 against Edmonton this year and their lone victory was Nov 16, 2019, at the Canalta Centre when the Tabbies won 5-1. The Tigers’ top point producers against the Oil Kings are Captain James Hamblin with seven points (2G, 5A) and Corson Hopwo with six points (2G, 4A). Over the past five years, Medicine Hat is 14-7-2-0 against Edmonton and 8-1-2-0 when playing at home.

The Edmonton Oil Kings defeated the Swift Current Broncos 4-1 last night at Rogers Place. Scott Atkinson and Jalen Luypen each put in two point performances (1G, 1A) in the contest. The Oil Kings are in first place in the Central Division and they are 42-11-6-4 so far this season. Veteran forward Riley Sawchuk leads the Oil Kings as their top point producer with 76 points (25G, 51A). After tonight’s game in Medicine Hat, the Oil Kings will travel to Lethbridge next Friday to play the Hurricanes.

Cole Clayton is in his third season with the Orange and Black. The veteran blueliner is as competive as they come. Clayton is a hard nosed defenceman that has great poise with the puck and makes plays under pressure. Although the 20-year-old Strathmore product is primarily a stay at home defenceman, Clayton still contributes offensively by making smart plays. Look for him to be relied upon against the Oil Kings’ top players in tonight’s tilt.

Captain James Hamblin is the Tigers’ top point producer with 89 points (36G, 53A) and he is third in league scoring. Hamblin is a speedy, skilled two-way forward who leads the Tigers with tenacity and hard work.  The 20-year-old Edmonton product was drafted by the Tabbies in the first round of the 2014 Bantam draft. In his career as a Tiger, he has suited up for 322 games, scored 115 goals and collected 166 assists. This season he has already set new career bests in all offensive categories. Earlier this season, Hamblin scored his first career WHL hat trick (Nov 2, 2019 vs VIC) and in January he scored four goals, including a first period natural hat trick (Jan 18, 2020 vs LET). Look for Hamblin to make an impact at both ends of the ice in tonight’s game against the Oil Kings.

RE/MAX was founded on the belief that by providing the best training, administrative and marketing support possible to independent business owners, they would be free to focus on what they do best – sell real estate and operate dynamic brokerages. Woven into the fabric of RE/MAX is a deep connection to the community. RE/MAX strongly believes in being productive, contributing members of the communities in which they work and live.

The Kidney Foundation of Canada was created in Montreal in 1964, and it is the national health charity committed to kidney health and to improved lives for all people living with kidney disease. Their vision for the future is an enduring legacy of those dedicated volunteers who, 50 years ago, started out with a compelling cause and the resolve to make a difference.