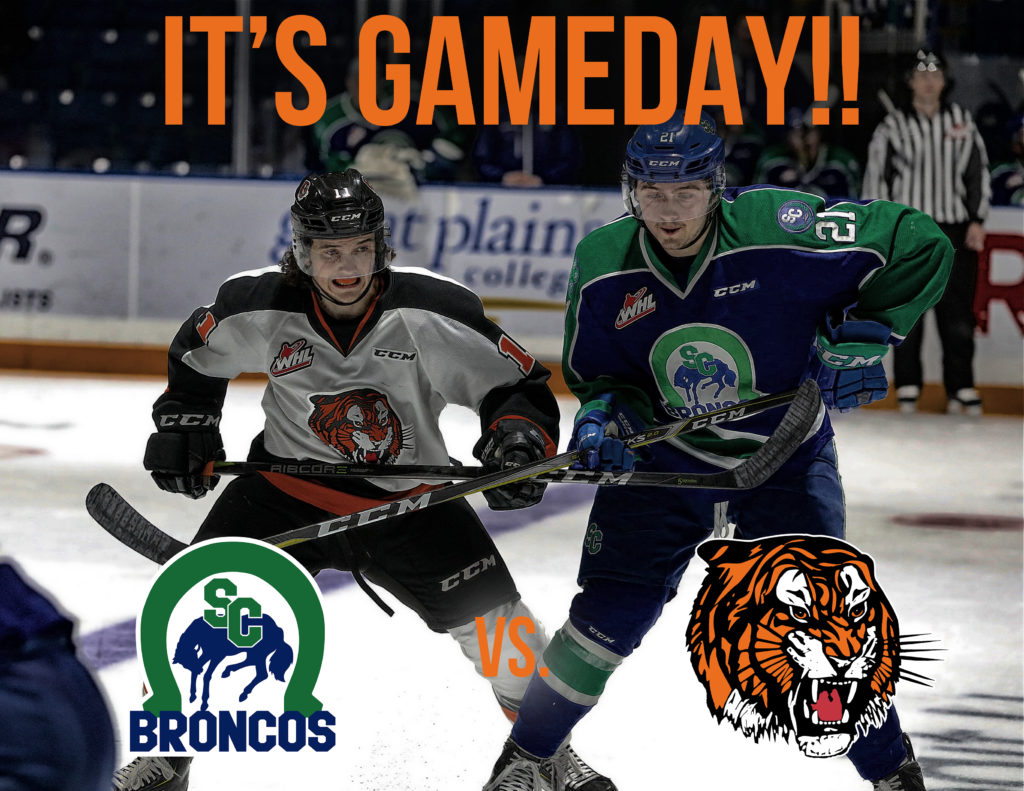 The Medicine Hat Tigers are 31-25-3-2 after falling 4-2 to the Edmonton Oil Kings last night. Rookie goaltender Mads Søgaard made 41 saves on 44 shots faced while earning the second star of the night. Veteran forward Ryan Chyzowski had his 11th multi-point game of the season with a goal and an assist in the losing contest. The Tigers are currently sitting in 5th place in the Central Division and they are battling for a playoff spot. Captain James Hamblin leads the team with 68 points (32G, 36A).

The Tigers and the Broncos will meet tonight for the final time this season. Medicine Hat is 3-0-0-0 against Swift Current this season and 8-7-0-0 over the past five years. The last time these two rivals met was January 19th when the Tigers won 5-3. Trevor Longo scored the game-winning goal with 52 seconds left to play and James Hamblin scored on an empty net with 19 seconds left to ensure the victory for the Tigers.

The Swift Current Broncos stop in Medicine Hat for the fourth game of their seven-game road trip. The Broncos have yet to win a game on their road trip after falling 5-3 to the Kootenay ICE last night in Cranbrook. Swift Current is 10-45-3-2 this season and they are led by defenceman Connor Horning with 30 points (7G, 23A) and forward Ethan Regnier with 28 points (9G, 19A). Veteran forward Ethan O’Rourke has been the most dangerous Bronco against the Tigers this season with 2 goals in 3 games played.

Hayden Ostir has 2 points (1G, 1A) in 3 games played since returning to action after sustaining an injury in early January. The 19-year-old Winnipeg MB native set a new career high in goals (10) after scoring in last night’s tilt against the Oil King. He is a hard-nosed, tenacious forward with quick hands, and great puck instincts. Look for Ostir to drive to the net and create scoring opportunities in tonight’s tilt.

Captain James Hamblin has been the Tigers’ top point producer all season with 68 points (32G, 36A) in 61 games played this season. The 19-year-old Edmonton AB product is a hard working, two way forward who leads his team by example. Hamblin was the Tigers’ first-round bantam pick in 2014 and since then he has played in 255 games for the Orange and Black while scoring 78 goals and picking up 105 assists.

Ashley HomeStore was founded in 1997 and it comprises over 800 locations worldwide where they sell Ashley Furniture. A portion of every Ashley HomeStore mattress set purchase goes to the Hope to Dream, a program designated to provide a free twin mattress, box spring and bed frame to underprivileged children. The Medicine Hat Tigers and the WHL are proud to partner with Ashley HomeStore’s A Hope to Dream program.

The Medicine Hat Astronomy Club has been an active part of our community for 39 years, hosting youth groups, school groups and the general public alike to enjoy and learn about stars. The entire organization has been built with volunteer labour and membership is open to anyone, there is no need to be an expert, as long as you have an interest in the stars.