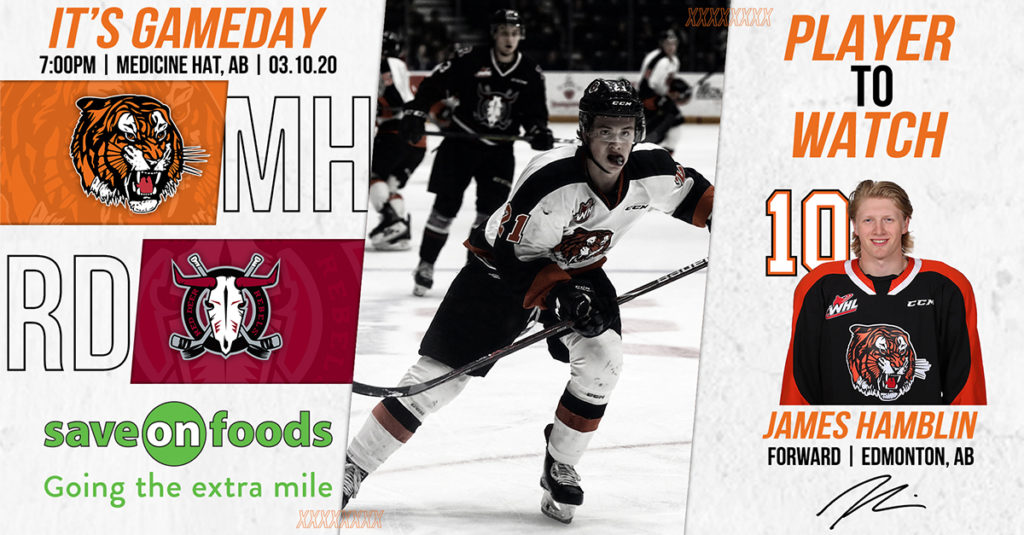 The Medicine Hat Tigers put in two strong performances this past weekend defeating the Calgary Hitmen 5-1 Friday and the Edmonton Oil Kings 4-1 Saturday. Leading the charge offensively were veteran forwards Brett Kemp with five points (1G, 4A), Ryan Chyzowski with four points (2G, 2A) and Captain James Hamblin with three points (all assists). Ottawa Senators goaltending prospects Mads Søgaard stopped a total of 64 out of 66 shots faced throughout both games to collect the wins. The Orange and Black are now 40-19-2-1 and they are led by Hamblin with 91 points (36G, 55A). After tonight’s game against the Rebels, they will travel to Swift Current Friday for the first game of a home and home series with the Broncos this weekend.

For the fifth time this season, the Tigers will take on the Rebels. The Orange and Black are 2-1-1-0 against the Rebels and the last time they won was Nov 15, 2019, in a 4-3 shootout. Jonathan Brinkman scored the game winning goal that game. In their head to head series this season, Captain James Hamblin is the Tabbies’ leading scorer against the Rebels with seven points (3G, 4A). Over the past five years, Medicine Hat is 15-6-1-0 against Red Deer and 7-3-1-0 when playing at home. After tonight, these two Central Division Rivals will meet one more time next Tuesday at the Westerner Park Centrium.

The Red Deer Rebels finished off a five game homestand by defeating the Swift Current Broncos 4-3 in overtime on Saturday. Ben King scored the game winning goal for the Rebels in extra time. During their homestand, the Rebels went 3-2-0-0 and they are now 23-33-2-3 this season. Arshdeep Bains is the Rebels’ leading scorer with 50 points (17G, 33A) so far. After tonight, Red Deer will travel to Swift Current to play the Broncos Wednesday before returning home Saturday for the first game in a home and home series with Calgary.

Captain James Hamblin has set new career bests in all offensive categories with 91 points (36G, 55A). The 20-year-old Edmonton product is the Tigers’ top scorer and he is currently third in league scoring. Hamblin is a hardworking, smart, two-way forward who leads his team by example. He is a fierce forechecker, an offensive generator and he is heavily relied upon in all situations by the coaches and his teammates. Hamblin also excels at even strength play with 63 points (28G, 35A) of his points coming during five on five play. Look for the Tigers’ second year Captain to make an impact in tonight’s tilt.

Save on Foods is a chain of supermarkets owned and operated in Western Canada. Save-On-Foods operates 110 stores in British Columbia, 39 in Alberta, six in Saskatchewan, three in Manitoba and one in the Yukon Territory.

Saamis Immigration Services is a nonprofit organization dedicated to assisting newcomers in the integration, adjustment and resettlement in Canada for the last 32 plus years. They provide a support system which fosters individual and family needs in an environment of equality and dignity. They also provide full-time language instruction classes, settlement services, and support workers in the school system for newcomer families.